Values of used eco- and alternative fuelled cars are continuing to outperform the market.

Values from the latest BCA Pulse report show that the small number of alternative fuelled vehicles entered for sale by fleet operators are averaging up to 122% of guide prices.

In comparison, average fleet values for petrol and diesel are currently around 92% of CAP Clean.

Demand is actually increasing for hybrid electric/petrol cars such as the Honda Civic and Toyota Prius and volumes sold have overtaken those of petrol/LPG cars – although numbers remain small.

BCA’s found that 5% of car buyers said their next car will be an alternatively-fuelled car, with the vast majority preferring to buy used.

Almost 30% of motorists said they would move to a car with a lower CO2 emission rating to cope with proposed changes in VED.

"The key issue for ‘green’, alternative fuelled cars is acceptability with the general motoring public, because they will drive the demand in the used market,” said BCA’s Simon Henstock.

“The general rule of thumb is where fleets go, motorists follow, and if fleets move towards alternative fuels, then used car buyers will move accordingly.”

With demand continuing to rise and average values for hybrid/electric and LPG-powered cars continuing to be well ahead of expected guide prices, sellers are being advised to take advantage of regional demand and sell alternative fuelled vehicles in areas where congestion or emissions charging is in place.

“Otherwise the normal rules of re-selling apply – presentation and preparation are as important for alternative fuels as any other vehicle,” said Mr Henstock.

“Last year BCA suggested there needed to be a sea-change in public opinion before any kind of ‘alternative’ fuels became acceptable and it took the very high pump prices earlier this year and on-going economic woes to really kick-start the interest with private buyers.” 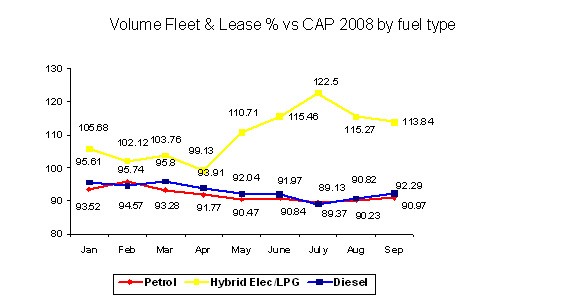