* the Pre-Budget Report confirms the introduction of new VED bands in 2009. However, there will be no significant rate changes until 2010, and no driver in any given band will pay more than £30 more in that year.

* from April 2009, six new bands of VED will be introduced, taking the total to 13. However, VED rates will not increase by more than £5 for any car in this year

* from April 2010, in order for the new bands to create an environmental incentive, the Government will start to separate out the 13 differential rates;

* from April 2010, a differential first-year rate for new vehicles will be introduced as announced in Budget 2008, in order to "provide a stronger signal to consumers at the point of purchase". The more polluting cars will see their duty increased up to a maximum of £30, not £90 as originally planned. Less polluting cars will see it stay the same or be cut

* Cars registered before 2001 – which account for around a third of the UK car parc – are not subject to these reforms, because comprehensive data on their CO2 emissions is not available. Instead, pre-2001 cars are subject to a separate VED regime, based on engine size. 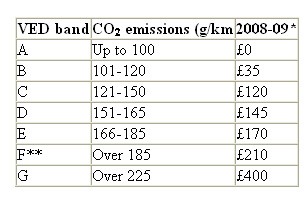 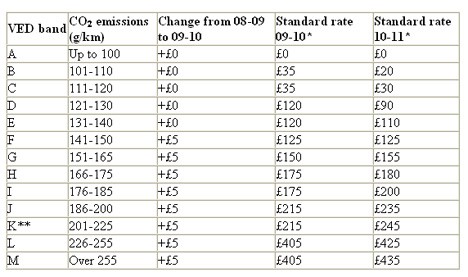 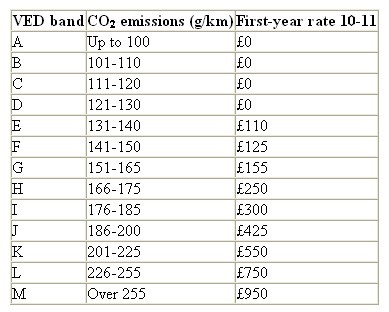 * Fuel duty increases continue so as to offset the VAT decrease. From Monday duty for unleaded petrol and diesel will be increased by 2 pence per litre (ppl). These rates will be further increased on April 1, 2009 by 1.84 ppl, and on April 1, 2010 by 0.5 ppl above indexation in that year.

The PBR confirmed the government’s intention to modernise the tax relief for business expenditure on cars.

The existing arrangements will be replaced by an emissions-based system, taking effect from April 1, 2009 for corporation tax and April 6, 2009 for income tax. A technical note and draft legislation setting out the full detail will be published shortly.

The 2006 Budget announced an HMRC review into the taxation of employee car ownership schemes (ECOS). The summary of the report was published today. The government has decided not to impose a speci?c tax on ECOS, or alter the structure of AMAPs at the current time, but to "continue to provide a clear and simple system for business and employees".

* £3bn of capital spending projects will be brought forward, including motorway-building projects and fuel duty to increase

* £20bn fiscal stimulus will be introduced between now and 2010

* Borrowing will rise to 8% of GDP next year

* VAT will be cut from 17.5% to 15% until the end of next 2009 - this will come into effect next Monday (Dec 1). This is the equivalent, for the average household, of £275 a year for extra spending. The new rate will apply until December 31, 2009, when it will revert to 17.5%. Only standard-rated sales are affected. There are no changes to sales that are zero-rated or reduced-rated for VAT. Similarly, there are no changes to the VAT exemptions.

* Income tax changes become permanent and will be increased