New advisory fuel rates, which have been cut to reflect the drop in fuel prices over the past six months, have been revealed by HMRC.

The rates, which apply to drivers using their company cars for business, will apply from 1 January, 2009.

LPG rates stay the same, apart from on cars over 2000cc where they drop by a penny.

As was done for the July 2008 changes, HMRC says the new rates can be implemented immediately where employers are able and 'wish to do so'. 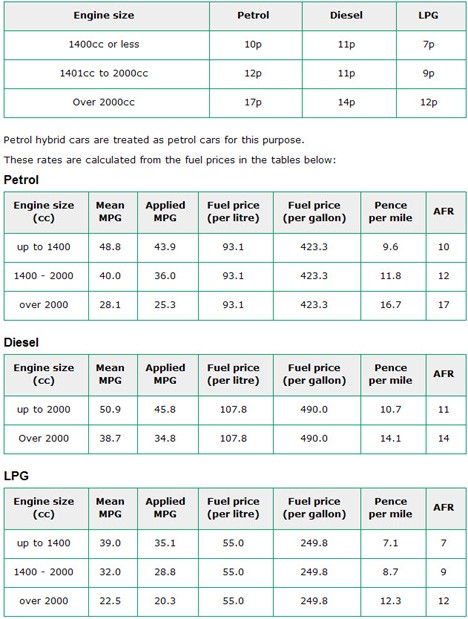 Definition: Approved Mileage Allowance Payments (AMAPs): a statutory exemption from tax for payments (up to a certain level, the ‘approved amount for mileage allowance payments’, EIM31230 onwards) to employees who carry out business travel in their own cars, vans, motor cycles or cycles

For LPG, mpg is assumed to be 20 per cent lower than for petrol due to lower volumetric energy density.

Department for Business, Enterprise & Regulatory Reform's latest petrol and diesel prices (25 November 2008), LPG from AA website (November 2008). Prices have been adjusted for the impending changes to fuel duty and VAT.

Will the rate per mile figures change if fuel prices go up or down?

With effect from the January 2008 change, the rates will be reviewed twice a year.

Any changes will take effect on 1 January and 1 July but will be published on the HMRC website about one month in advance.

HMRC will also consider changing the rates if fuel prices fluctuate by 5 per cent from the published rates when each review is made and we consider the price change will be sustained.

Employers should make themselves aware of any changes by referring to this page in June and December each year. It is the primary source of information.

VAT
Customs will also accept the figures in the table for VAT purposes though employers will need to retain receipts in line with current legislation.