Spare a thought for us poor old journos churning out long-term test reports!

We have a van for six months and after eulogising about its finer points ad nauseam, there isn’t a lot else to say unless it goes wrong or starts playing up.

In the case of the Citroën Relay, it has been reliable to the point of tedium so far. I was pondering what I was going to write about in my next report while waiting at a roundabout the other day ready to pull out into the stream of traffic when – almost like manna from heaven – a Mercedes-Benz Sprinter loaded up with pre-packed sandwiches slammed straight into the back of my van.

Now most people would look upon an incident like this in a negative light but, after ascertaining that the Mem Sahib (who was sitting in the passenger seat) was uninjured I smiled brightly and said: “Well, that’s solved one problem anyway – I’ll now be able to report on how the Relay handles itself in a crash situation.”

I alighted and scuttled round to the back of the van, where a rueful driver immediately admitted his guilt.

I felt quite sorry for him actually – he was obviously in a tearing hurry to get his sandwiches delivered before lunchtime (our accident having occurred at 12.30pm) and just hadn’t seen that I’d pulled up.

And I’ll tell you what – his Sprinter was in a much worse state than my Relay. It had piled right into the rear step on the Citroën and a fair number of bits of plastic were hanging off, whereas my van only suffered a small dent to one of the rear doors.

Rather curiously, he told me: “Sorry mate but the brakes are sh*t on this van!”

I felt like pointing out that as editor of the UK’s most vibrant van magazine and as a tester who has driven just about every van available to mankind, I happened to know that the Sprinter has some of the best stoppers in the business, backed up by ABS brakes and ESP traction control as a standard fitment. But not wanting to prolong the ordeal I simply swapped details.

To my amusement as he drove off I noticed there was one of those How’s My Driving? stickers on the back of his van.

“Not very good,” is the obvious answer to that particular question.

The main problem with a ding like this is the hassle that comes afterwards.

I firstly had to call the lads at the Citroën press office to tell them about the incident and then there was a big form to fill in.

So far I have had to take the van to the local Citroën dealer for an estimate of the damage and soon I will lose it for a couple of days while the repair is being carried out. It’s all time-out that a busy fleet manager can do without.

This incident apart, the Relay is continuing to disport itself with the utmost aplomb.

We’ve put almost 4,000 miles on the clock in the past couple of months and on several occasions the van has been loaded down to the gills with furniture, a fact that didn’t seem to have any effect at all on the ride and handling of the vehicle. 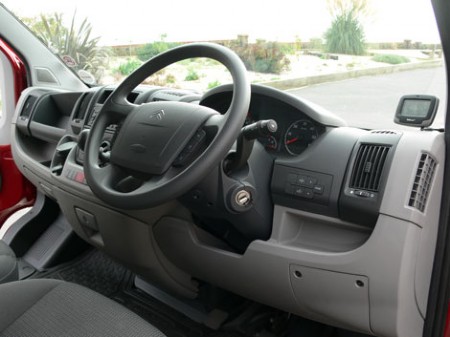 As reported in the last issue, we are particularly impressed with the fuel economy of the Relay.

True, a lot of the miles covered have been the motorway variety but even so, the onboard fuel economy meter is reading a steady 37.8 miles per gallon, which is little short of amazing for a van of this size.