Fleet drivers are being advised to be on their guard after it emerged that the number of fraudulent claims being made as a result of staged accidents is increasing.

Estimates by the Insurance Fraud Bureau suggest that the cost of fraudulent claims is now over £500,000 every day - costs which are passed on in the form of higher premiums.

Figures obtained exclusively by Fleet News show that fleets operating in cities in the north and midlands are running the highest risk of being targeted by criminal gangs who stage crashes to defraud insurance companies.

However, areas of Greater London are becoming fraud hotspots.

Car fleets are particularly at risk, as fraudsters target new vehicles on the assumption that they are almost certain to have insurance.

However, commercial vehicle fleets are also increasingly being targeted.

According to anti-fraud and litigation solicitors, Keoghs, which acts for over 40 major insurance organisations, the most risky city for fleets is Bradford, closely followed by Birmingham and Liverpool.

It has been shown in latest Keoghs’ Annual Fraud Index that criminal gangs operating in these cities are responsible for almost one-fifth of all suspicious crashes investigated by the firm on behalf of insurance companies.

While staged crashes are still most prevalent in the north, especially along the M62 corridor, the figures show that the practice is becoming increasingly common in many southern areas.

“These crash-for-cash accidents are being systematically staged by organised fraud rings throughout the country,” said James Heath, director of counter fraud strategy at Keoghs.

“We are seeing more suspicious claims.

"This may be down in part to better detection, but there is certainly more fraud activity going on.”

The ‘accidents’ often involve a vehicle in front braking heavily before a junction causing the victim to crash into the back of it.

Increasingly, however, a decoy vehicle is also used, which swerves across the victim’s path causing the driver to crash into another vehicle.

Major motorway junctions near heavily built-up areas are the most common sites used by fraudsters to stage accidents, which is confirmed by the number of claims in the Birmingham area, the country’s second worst affected region.

“It doesn’t take much investment to make this pay, the fraudsters will look for money to cover vehicle damage, replacement costs and personal injuries, which could easily exceed £30,000 per claim,” said Mr Heath.

“And these fraudsters are running multiple claims each day – they put in volume claims so they can drop some if they are detected.”

On a positive note, detection rates and prosecutions are also increasing.

The establishment of policing bodies such as the National Fraud Review and the Serious Organised Crime Agency have ensured that insurance fraud is also now high on many forces’ agendas.

As a result, if fleet managers feel one of their drivers have been the victim of a staged crash, they should contact the police, the Insurance Fraud Investigation Group and their insurance company as soon as the possible after the incident.

Fleet managers should also advise their drivers that if they are involved in a suspicious crash, they should take as many details of the occupants, the damage and the situation as possible.

However they should not put themselves at risk.

“Try to get as much information as possible without being confrontational,” advises Mr Heath.

“Be aware that these are organised criminals, so balance vigilance with personal safety.”

The police stress that they will respond to a crash only when someone is injured.

However, an Association of Chief Police Officers’ spokesman added: “If there is an issue of one individual threatening, intimidating or assaulting another at the scene of an accident, then that is a different matter and does warrant a police intervention.” 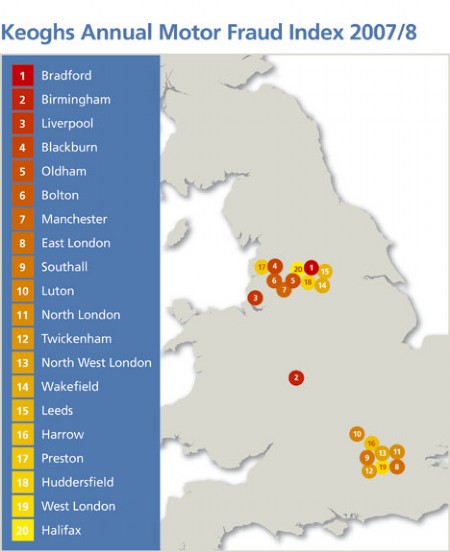