Fleets were forced to pay thousands of pounds extra at the pumps just to put the same amount of fuel in their vehicles last month.

Fleet operators with diesel-powered vehicles have been hit hardest, as the cost of this fuel is rising far more rapidly than that of petrol.

Following the latest round of price increases, the UK now has the second highest diesel prices in Europe and the tenth highest unleaded prices.

And fleet operators have been warned to expect further increases in fuel prices in the coming weeks, with petrol predicted to hit £1.50 a litre by the end of the summer.

Despite the Chancellor’s decision to defer a two-pence rise in fuel duty until October, the price of unleaded petrol still rose by more than two pence in the past month.

Diesel prices rose even more dramatically - by five pence per litre in just one month, according to the latest AA figures.

This means a typical fleet of 200 diesel cars averaging 40mpg over 2,000 miles paid over £2,200 more for diesel last month than in February.

When compared to what it was paying five years ago, the same fleet has been faced with a cost increase of 33 pence extra per litre.

This equates to a £14,700 increase in fuel costs every month to cover the same mileage in the same vehicles.

The highest petrol prices in the UK are already above £1.20 a litre, with diesel hitting 127.9 pence a litre in some places, according to fuel price comparison site, www.petrolprices.com.

"We predicted in February that petrol would hit £1.50 a litre this year, but if these conditions continue and the government doesn't work harder to stem the rising prices, then we're likely to hit £1.50 a litre by September,” said Brendan McLoughlin, managing director of petrolprices.com.

“That would be a disaster for the country.”

The current high fuel prices are also the result of normal seasonal demand and the work of speculators, explained the Petrol Retailers Association (PRA).

“Financial speculators are investing in oil markets and pushing prices higher, then taking a profit and watching prices fall back before starting the whole process all over again,” said Ray Holloway, PRA director.

“At the same time thanks to the Government, UK motorists still pay the highest fuel duty in the world.”

However, he added that it was “extremely doubtful” that the price of a litre of petrol will hit £1.50.

“Motorists will pay slightly more per litre until mid year, when the increase will drop away,” he said.

In its latest fuel cost report, the AA warned to expect the worst.

“With the price of oil now established well above the $100-a-barrel mark, UK fuel prices look set to continue rising to new records going into the spring.”

For low mileage fleets, there is a growing argument for adopting low-capacity petrol or petrol hybrid vehicles, particularly if they are used within cities.

This is especially the case as the price difference between unleaded and diesel has risen from 5.3ppl to 7.5ppl.

““Fuel spend in many organisations is often devolved into many different budgets and we often find no one is in overall control," said Nigel Underdown head of transport advice at the Energy Saving Trust.

“At today’s prices there has never been a better time to save fuel.”

Operators wanting to optimise the efficiency of their fleets can benefit from a free fleet audit carried out by the EST. 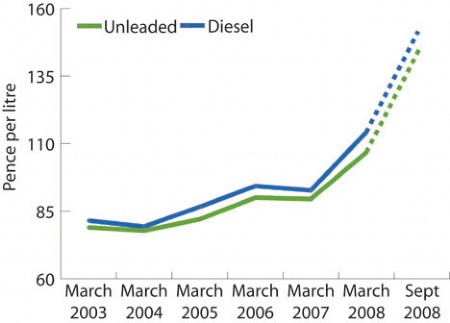