If one word could sum up the Vauxhall Vectra, workmanlike would be it.

Solid, if uninspiring, looks and an interior that does the job without really making the driver feel special.

But times are moving quickly.

Drivers expect even more glamour from even the most trustworthy of products.

Paul Adler, brand manager – fleet, said: “This new car has real emotional pull, and we have taken its appeal to a new level. This brings some new opportunities for us.

“We will be targeting those user-choosers who choose lower-end premium models, and show them that the Insignia can offer everything they want.”

Malcolm Ward, the Luton-born exterior designer of the Insignia, is aiming for the wow factor with the Insignia.

He said: “We were aiming for a design that is bold and sculptural.

We want people’s first impression to be ‘wow – what’s that?’”

Job done on that front then. The Insignia, with its large chrome grille, sharp headlights and long carved metal flanks is like nothing that has ever come off the Vauxhall production line.

Talk from Mr Ward is of blades and wings, hardly the language of a conservative design.

The front lights have a wing graphic that is seen throughout the car, inside and out, with daytime running lights on all models.

If you’re driving an Insignia, you’ll be telling people you are coming.

Along the sides is a long crease that starts at the C-pillar, runs under the windows and then steeply drops to the undertray.

This is the second design motif, called the blade, that again is replicated throughout the car.

By the time you have taken these striking features in, you make it to the back of the car and here things really get exciting.

Although the Insignia will come in only saloon and hatch form to start with, it looks as though every driver will be getting a coupé as the sculptural lines sweep around the rear.

Both saloon and hatch will look almost identical, with only a slight 20mm height rise around the C-pillar of the five-door to accommodate the hinges.

“We were determined that the saloon should look as stylish as the hatch,” says Mr Ward.

Great design, low drag – the Insignia has a drag coefficient of 0.27, making it among the most slippery in its class, achieved without extra underbody panelling to make it even more efficient through the air.

Although executives remained tight-lipped, expect to see such fuel-saving extras appearing on a high-efficiency model range.

Such is the focus on efficiency, even the upper half of the door mirrors got a late redesign to reduce drag, resulting in an extra 0.175mpg.

“Attention to detail about the savings made to make this car as efficient as possible will be a recurring theme in the run up to its launch,” a spokesman said. 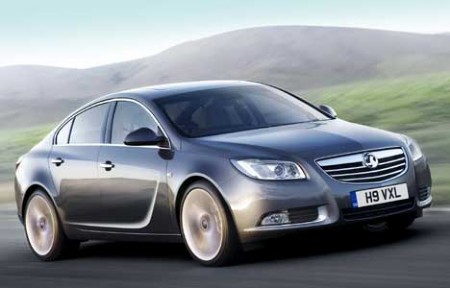 It’s a Vauxhall Jim, but not as we know it.

Cars like the Astra Sport Hatch showed that the Luton firm is becoming bolder with its design, but nothing can prepare you for the leap that is the Insignia.

It oozes class, presence and style.

If you are pleasantly surprised by the exterior, expect to be blown away by the interior.

The wing theme continues across the entire width of the dash, while blade accents appear on the door handles, around the gear lever and on the steering wheel.

The wing makes the front section of the cabin feel wide and spacious, while also wrapping around the occupants.

The blade design on the doors is incorporated into a multitude of materials – in the colour scheme for the Insignia, layers of materials and colours break up the space and ensure it is not too oppressive.

It also means that on all models, the bottom part of the cabin is made of darker plastic and carpet.

Gone is the upright dash of previous Vauxhalls.

The central console is canted at 30 degrees.

Also binned is the orange lighting of all previous cars.

Insignia is predominately backlit white, except when the Sport button is pressed.

Then all lighting goes red. Gimmicky?

But showing a level of humour and willingness to do something out of the ordinary not seen in a core Vauxhall product before.

There is a lot of switchgear: the decision was made that giving most functions buttons rather than lumping them all on a touch screen was a driver safety feature.

And all those buttons suggest the Insignia will come armed with plenty of toys, including lane assistance, active cruise control, adaptable dampers, hot and cold seats and Sport and Touring modes.

Expect a four-wheel drive model at the top of the range.

But the stand-out feature of the interior is the quality.

The cars we saw were pre-production models but the standard of materials and the execution are as good as anything Audi, BMW or Mercedes-Benz could muster. 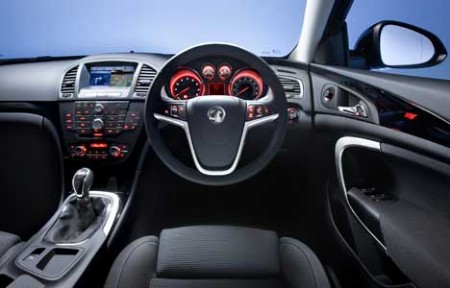 Perhaps even better at times.

Soft-touch plastics, bamboo-style wood or piano black inserts suggest this is a Vauxhall where contemporary design cues are a major inspiration.

In Sport trim, which is all black save for some lighter stitching and the red glow of the lighting, the Insignia will be stunning.

There can be only one criticism of the Insignia at the moment, and that is that it’s stationary.

We’ll have to wait until after the Paris Motor Show in the autumn to drive it.

A driver having to spend 20,000 miles a year in this cabin will count themselves very fortunate indeed.