Vauxhall is to introduce a system that reads speed limit signs in the forthcoming Insignia.

The Front Camera System is the first of its kind to be offered in a production car and will be an option from early next year.

It consists of a duel function camera that reads speed limit and no overtaking signs and displays them on the instrument panel, as well as alerting drivers when they veer unintentionally out of their lane. 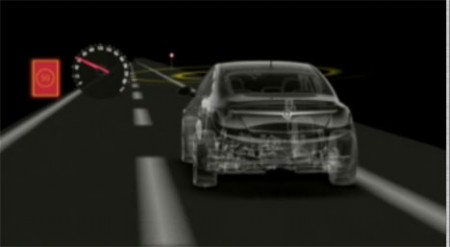 Developed by Vauxhall’s European counterpart Opel in association with supplier Hella, the camera sits behind the rear view mirror and can spot road signs and lane markings.

Capable of taking 30 pictures per second, it houses two signal processors that filter and read the photos.

At 100 metres the Traffic Sign Recognition function can focus on circular patterns and then identify numbers inside them.

When the software in the car finds a match, it displays the sign on the instrument panel and can even prioritise a no overtaking sign over a speed limit warning sign.

It can then send an audible and visual alarm from the instrument panel if it detects any deviation.

The system is intended to counteract such issues as drivers falling asleep at the wheel.

Vauxhall says that the combination of the two systems can improve driving safety, reduce stress and help prevent speeding tickets.

“That means the system gives drivers information, but it doesn’t intervene.”