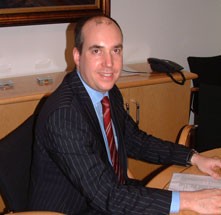 For a man who lived on a diet of fish and chips and ice cream during a recent holiday to Cornwall, the sumptuous dining room of a Grade I listed Regency building on Pall Mall seems a strange choice of venue for our meeting.

But Seb Goldin, newly appointed managing director of the Institute of Advanced Motorists’ (IAM) fleet division, explains that he joined the members’ club because he needed a London base.

So, what attracted him to the job? “It was one of those rare opportunities. It ticked all my boxes in terms of career direction. I like cars and I like driving, and I completely understand and empathise with the IAM’s charitable goals, ” he says.

“The principle objective is reducing deaths and improving road safety,” he explains. “The commercial part of the business does that in the corporate environment while the charity, which is membership based, does that in the consumer space.

“What I see is an organisation which has been very successful, and has some of the strongest brands in the industry.

“That was one of the attractions to the role. I’m not here to shake things up – it’s more tweaking than shaking.”

Seb’s first job in the fleet market was in corporate sales at Hertz before taking a partnership director role at Royal Mail, looking after its relationships with large utility and telecommunications customers.

It was there that he had his first “hands-on” experience of occupational driver training.

“I drove a seven-and-a-half tonner on a night shift,” he says. “I was helping out when there was industrial action and at Christmas time.

“I thought I’d got the hang of it until all the commuters came on the road. I was suddenly at a roundabout surrounded by cars thinking ‘oh, this isn’t quite so easy now’,” he laughs.

“What we’re beginning to see is a trend where occupational driver management or risk management is moving from being discretionary – a nice ‘to do’ by an organisation – to something a lot more mandatory.

“There is a real market growth opportunity. That growth is fuelled by both legislation and an awakening in the corporate mind of the financial, social and econ-omic benefits of driver training.”

And what are those economic benefits?

“Any investment in driver training will be more than funded by a reduction in fleet running costs, whether that’s more vehicles on the road because they’re not being bent in low-speed manoeuvring incidents, people not being off work because they’ve been injured, through to the nasty financials of having insurance, and worse, litigation, claims against your organisation.

Seb points out that being an advanced driver means you drive in a more considered and calm manner and, by default, use less fuel. On average, fuel economy can be improved by 8% to 10%.

“That’s a significant saving to the fuel purchase and the bottom line of a fleet manager,” he says.

And, from a corporate social responsibility perspective, an employer is enabling employees to become better, safer drivers through driver training.

“Driving for work has been rated as the second highest risk of accident, so the more an employer can do to improve the skills of their drivers, the better.”

There are a number of benefits for drivers, too.

“Training gives drivers greater confidence and therefore satisfaction in their own driving,” he says.

Everyone who goes through one of the organisation’s driver training programmes becomes an associate member of the IAM, and then has a year to become ready to take the advanced test. When they pass a major benefit is discounted insurance premiums.

IAM Fleet and Drive & Survive have a strong mix of corporate customers, ranging from large FTSE top 50 blue-chip companies to fleets of 15 to 20 cars and vans.

They are complementary brands but with differing ethoses.

“A number of companies look after railway power lines and they need 4x4s to get people to the job,” Seb explains.

“Rather than just throwing the keys to their employees they realise it’s their duty of care to make sure they have the correct training on the vehicles. A 4x4 is a very different beast.”

And what about the high-speed manoeuvring course?

"I’ve been on it and it really is back to basics. Without the electronics you feel like you’re driving a lawnmower.”

But what’s the benefit of drivers understanding technology like ABS?

“When you drive a car with ABS brakes on it’s all well and good, until the first time you stamp on the brakes hard and feel something slightly different with the brake pedal.
“The natural thing to do is back off and think ‘why’s it doing that?’ and the moment you take your foot off the brake you’re in trouble,” Seb explains.
“The course demonstrates that cars are loaded with technology these days and shows what it can do for you. And more importantly, it shows what it feels like when it’s working.

“We’re going to be developing more courses around how to harness and use technology that cars come with. We’ve also got a partnership with Ford where one of the dealer options is now a Drive & Survive risk management programme. We’re looking at promoting the safety and economy features of their cars.”

Cycle training is also a growth area with organisations such as GlaxoSmithKline using the IAM to train employees.

Seb himself is a keen cyclist, often commuting by bike. Recently he’s been cycling to train for a 10-kilometre charity race in London.

He’ll also be competing in a race of a different kind later this year – a classic car rally.

“There are a number of us at the IAM that have a passion for classic cars,” Seb says.

“We’re entering a rally in October which finishes with two laps of Silverstone.”

“I had one as a Dinky toy years ago and as soon as I got the opportunity to get a real one I did,” he says. “It’s been completely restored and it’s had a number of upgrades and modifications. It’s probably the only Jensen Interceptor that can do 22 mpg on a run.

“I took my advanced driver training test the day before my 40th birthday in the Jensen.”

Does he own any other classic cars?

And where would the perfect place to drive the Jensen be?

“Between Nice and Monte Carlo,” Seb replies. “You’ve got the mountains on one side and the sea on the other. And there are a few tunnels so you can listen to the car gently accelerating up the hill.”

A Cranfield Business School graduate, Seb Goldin started his career in the corporate travel industry. He switched to the fleet market in 1999, taking a corporate sales job with rental firm Hertz.

Five years later he became partnership director at Royal Mail. He was responsible for looking after its relationships in the utility and telecommunications markets, with revenues of £120m.

In February this year he became managing director of the IAM Fleet Group of companies (IAM Fleet and Drive & Survive) which provide occupational driver training. He also oversees IAM Ireland.