RARELY, if at all, will you find vans in the visitor’s car park at Raymond Blanc’s celebrated restaurant and hotel, le Manoir aux Quat’ Saisons in Oxfordshire.

The very idea of commercial vehicle users wining and dining at one of Britain’s top eateries is absurd.

But there they were – a good dozen of so of them – all lined up with the Bentleys and Maseratis.

And you know what?

They fitted in rather well.

The vans in question were Peugeot’s new small sector contenders the Bipper and Partner (pictured above) and both are probably the most unvanlike vans you’ll come across, a new breed of chic, stylish vehicles that are aimed at not only keeping fleet buyers happy with low running costs but also keeping the drivers happy too with good looks, high specification and pleasing road manners.

So far, we had driven left-hand drive examples of Bipper and Partner but this was the first time we could get our hands on UK spec vehicles.

As our driving event invite came together with a night at Quat’ Saisons for myself and the mem sahib, it didn’t take long for us to accept.

I’d love to write here about the sensational taste experiences we had during our six course meal, and tell you about the fabulous bathroom in our room and about the visit to the kitchen, with its 47 chefs, hosted personally by the great man himself, but as this is a van magazine rather than a gourmet cooking rag, I’ll confine myself to comments about commercial vehicles.

All I would suggest is that anyone wishing to score a few million brownie points with the missus would be well advised to check this place out!

The new Partner is based on the 308 chassis and therefore is much bigger all round than the old model.

The load area is wide enough to contain a standard Europallet while six load-lashing eyes will help keep cargo in place – and there is a sliding side door as standard.

ABS brakes with emergency brake assist are standard on all models while ESP traction control, tyre pressure sensors and cruise control will be options.

Under the bonnet there is a choice of petrol and diesel engines.

This was the fist time we’d clapped eyes on the long load length version, which is due in the UK in September, and if anything it looked even better than the standard version.

Our test van featured the 90bhp engine, which fired up smoothly and quietly from cold.

It had just two seats in the front with a large roll-top storage bin and coffee cup holder between them.

To be honest the third seat option is a bit of a waste of time as the middle one is so cramped.

Personally, I’d go for the bin option every time.

The driver and passenger seats are glorious (the old Partner’s were nothing to write home about) and feature plenty of back, side and lumbar support.

One problem that revealed itself in RHD format was a shortage of space for the left foot when it isn’t using the clutch.

It’s one of the things that tends to happen when you swap the steering wheel from one side to another.

The van had 300kg of sand in the back which really made the drive a lot smoother, while not seeming to sap any of its power. 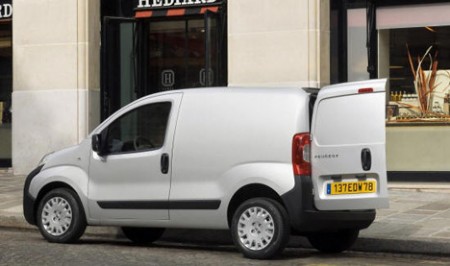 After a lunch stop we swapped into the smaller Bipper and although the cab seemed comparatively cramped at first, we soon got used to it.

The Bipper is very much designed as an urban delivery vehicle and has an amazing turning circle of 9.9 metres, which came in handy when we had to squeeze out of the car park.

The Bipper can carry 610kg of cargo in 2.5 cubic metres of space, which expands to 2.8 cubic metres with the clever folding passenger seat stowed away.

A low step at the back means drivers will only have to lift cargo 527mm to get it in.

Under the bonnet, there’s either a 1.4-litre petrol or 1.4 HDi diesel, thus allowing for LPG conversions to be made afterwards.

Our diesel model once again featured VERY comfortable seats and a reasonable amount of storage space, including an overhead shelf, despite its petite proportions.

There’s also a clipboard affair on top of the dash which pops up and will hold an A4 sheaf of paper.

Once again, this van features a dashmounted short-throw gearlever which snicks into place nicely and its size means that the Bipper can be thrown into corners with great gusto, which probably isn’t good news for fleet managers!

Mind you, this van is so frugal that even with enthusiastic driving, it’s still going to be a snip to run.

Peugeot’s van sales were already up 7% this year, even before the launch of these models.

Watch out for a rash of new lion badges and some very happy drivers on the UK’s roads this summer.