The latest blue light vehicles were on show at the National Association of Police Fleet Managers' exhibition. 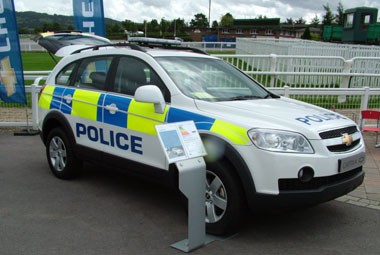 A police converted Insignia will be available next year as Vauxhall looks to take on BMW in the high-performance category.

This will be Vauxhall’s first ‘fast response’ vehicle in the police fleet market and is being launched in the second quarter of 2009.

It will have all the features needed to make it fully operational, including a light bar, siren and ancillary wiring, and it will be decked in police livery.

Dick Ellam, manager of vehicle conversions at GM UK Fleet, is forecasting sales of around 300.

He said that the Astra (available as a turn key solution since April, and on display at the NAPFM show) is Vauxhall’s biggest seller in the blue-light market.

“The Astra fits the role as a beat vehicle. It’s robust, reliable, economical and competitively priced.”

Also unveiled at the show were the Chevrolet Captiva (a rural beat model) and the blue-light Vivaro.

A bike carrier fitted to a Corsa attracted interest from several police fleets due to its dual functionality. 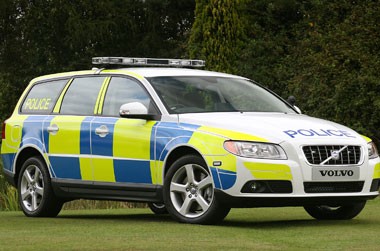 Centre stage on the Volvo stand was a prototype of the V70 Turn Key police car.

It features a run lock system which can be activated by a remote control and a timed rear door lock system.

One of the plus points of turn key solutions is reduced risk, according to Sarah Tottle, special vehicles manager at Volvo UK.

“Corporate manslaughter is a big issue for fleets,” she said.

“Police fleet man-agers and senior officers are very aware that when they fit additional equipment, potentially they could be held responsible if anything goes wrong.

"With the V70 Turn Key, responsibility for installation is ours.

"Everything is quality assured and tested, and therefore catered for in terms of risk.

"Turn key solutions are the way police fleets are looking to go.”

Another benefit of factory-built police cars is reduced waiting time.

Volvo said customers can expect delivery within 12 to 14 weeks of their initial order. 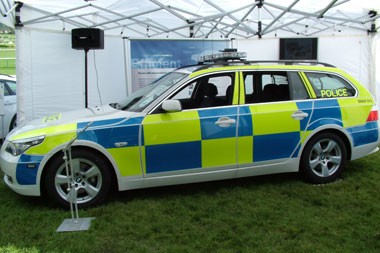 The talk of the BMW Authorities’ stand was a special option package which can be ordered on 3 Series and 5 Series models from January.

The ‘enabled package’ has been under development for three years, with a concept model on display at last year’s NAPFM exhibition.

It includes blue lights pre-built into the grille and a roof connector which reduces the need to have lots of holes drilled into the bodywork.

“When the vehicle goes back to market there’s no need to refinish the roof.”

A safety feature of the enabled package is that the telephone button on the steering wheel has been converted to a ‘999’ button.

Rather than having to take their hands off the wheel, the police officer can press the button once to put the blue lights on, press it a second time for the red lights and press it a third time to turn the lights off.

An automated voice alerts the driver when the lights are activated.

Also on display was the R1200 RTP, the biggest-selling police motorbike in the UK.

Fleets should look out for the launch of the G650 GSP, which can be used on and off road and is exclusive to the authorities’ market.

Mercedes-Benz focused on vans, showcasing the Sprinter 4x4 which has had interest from fire brigades and ambulance trusts.

The Evo X with 300bhp was one of Mitsubishi’s attractions, along with the new Lancer.

The Shogun, used by the Met, and the Outlander, were on the stand, too.

Nissan’s strength in the blue-light market is utility 4x4s and on display were the Pathfinder, X-Trail and Navara.

James Wood, major accounts manager at Nissan, said that the models are popular for different reasons.

The new 308 SW, praised for its boot space, was on the Peugeot stand.

Peugeot said there has been a move away from hatchbacks to estate cars as forces look for extra space for equipment.

Also on display was the Bipper (pictured) and the 100% electric vehicle, the Expert.

The Legacy and Outback are Subaru’s biggest sellers in the market and are used for covert operations.

Following high demand, Subaru unveiled diesel versions at the show. Also on display was an Impreza in police livery.