When was the last time you gave a thought to your vans’ windscreens? If you’re a typical fleet operator, the answer is probably never, unless there’s a problem.

The trouble with windscreens is that they aren’t intrinsically very interesting. They sit there quietly doing their work for months or even years and suddenly, BANG, the screen is cracked and you have a vehicle off the road while it’s being fixed.

And thereby lies the problem faced by Nigel Doggett, managing director of Britain’s biggest windscreen replacement company Autoglass. How do you persuade fleets to take an interest in something small when there are so many big issues to think about?

For those who decide to take the plunge and investigate the possibility of instigating a new van fleet windscreen strategy, a pleasant surprise awaits.

According to Doggett, by concentrating on screen issues, a fleet can not only improve its health and safety stance but can also save cash too. A double-whammy of positives in fact.

By reporting a chip immediately after it happens, a screen can be repaired. But leave it a month or two and a replacement will be needed, with the obvious financial consequences.
“That’s the greatest problem for van fleets,” Doggett told Fleet Van.

“Many van drivers will happily drive around with a chipped windscreen without reporting it to their managers and it’s something we try to preach about with our radio adverts, as we know that most van drivers listen to the radio.”

“Despite the fact that we don’t make as much money with a repair, we always fix a screen when we can,” said Doggett. “Some of our rivals don’t like this but they are gradually being dragged along with us. We put safety above profits.”

This stance sometimes finds itself at odds with profit margins. For example, Autoglass only fits OE-spec screens, unlike some of the opposition, and OE screens tend to be more expensive. But there is a problem with cheap screens – many of them aren’t as safe.

Doggett said: “There are some screens coming from places like India and China that I wouldn’t touch with
a bargepole. Some of them aren’t quite the right shape so when they are fitted, they don’t go in right. In the event of an accident, the screen pops out and the driver and passengers risk injury. After all, 30% of the rigidity of a car is in the windscreen.”

While many firms in the automotive world are struggling this year, business is booming at Autoglass. The reason for this is the heavy snow that fell over much of the UK in the winter.
A small chip in a screen can become a crack when a vehicle goes down a pothole – and plenty of new ones appeared as the snow receded.

Doggett said: “Last year we saw business drop as a result of the oil crisis. People were driving slower and not so many miles, with the result that fewer windscreens broke. But after the snow, business has been very good.”

So how can fleet operators set up a screen strategy? The first step is to order a complete review of the screens on a van fleet, which can be done, say, on a Sunday when all the vehicles are together in a compound. Autoglass carries out this service free of charge.

Then the operator can set up an account with Autoglass in which each driver receives a card with a phone number that can be called in the event of a problem.

The service is available right across Europe. Doggett said: “We charge a fixed monthly rate or, alternatively, we offer a straight discount or a fixed invoice deal in which we calculate the average price of a screen and charge the same for each job.”

Downtime is an important factor for van fleets and Autoglass keeps this to a  minimum, where possible, with an emergency service and same-day repairs on offer.

After a repair, a driver can use the van immediately and with replacements, the use of top quality glue means that a van can be driven after an hour.

Some other firms use cheaper glue which has to be left for five to six hours before use.

Autoglass has an impressive list of customers on its books. It has deals with leasing firms GE Capital, Lloyds TSB Autolease and LeasePlan.

Now the focus is on smaller fleets. Doggett admitted: “It’s an area that we have not really focused on in the past.”

He’s recruiting a new sales director with a brief to look at small fleet business and a team of 11 sales people to chase new sales across the UK.

A dedicated fleet website has also been set up. Autoglass’s motto is: ‘We fit safety as standard.’

Doggett added: “We will never compromise on safety and although our replacement screens may be more expensive than some others, we are much more likely to repair a screen, so on balance we are often cheaper.

“Our aim is to build up trusting relationships with fleet customers and when they see what we have to offer, they realise that we are the best.”

When setting up any new strategy, the key to success is to get your staff involved from the start.

They won’t like having new ideas foisted upon them any more than you would, so get all your drivers together and explain your motives – then ask them for their ideas.

You’d be surprised how many people will chip in (pardon the pun) with useful suggestions if you treat them like intelligent human beings rather than workhorses.

You should already have a system in place whereby drivers
are expected to walk round their vehicles each morning to check them for minor damage, under-inflated tyres, etc.

If you don’t, set one up immediately and print a drivers’ handbook so in the event of failure to carry out
checks, you can take appropriate action without a driver claiming: “Well, I didn’t know.”

Next, include ‘windscreen check’ in the daily list, adding that any damage, however small, should be reported straight away.
Then it’s down to you whether to use the carrot or the stick.
The stick involves threatening staff with some kind of penalty for failure to report a chip.

This could involve anything from a verbal warning to docking an amount from their pay packets to help pay for new windscreens.
We favour the carrot approach. Say a repair costs £70 and a replacement costs £500, why not offer a £50 bonus to any driver who reports damage that can be repaired rather than replaced?

Your staff will appreciate your generosity and financially you’ll be quids in too. 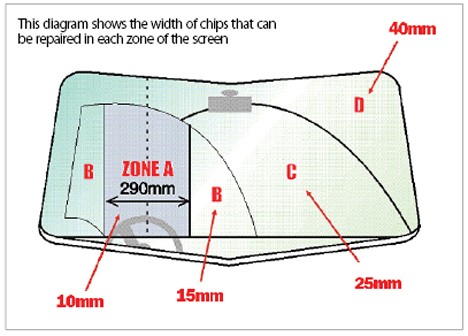