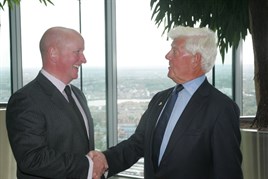 The new Chairmanof transport charity Transaid is urging the transport and logistics industry to play more of an active role in supporting the organisation’s goals.

Graeme McFaull, chief executive of Wincanton, believes much more can be done to reduce the number of road deaths in Africa and improve transport links to medical care for women and children, and says the industry has a responsibility to take action.

“I am honoured to be chairman of this charity and intend to use the position to ensure the industry is doing all in its power to support the charity’s projects in Africa,” said McFaull who took over from John Harvey CBE, who remains a trustee of the charity.

“I am very proud of the commitment my organisation has made over the years and I know many peers have also provided essential support, but there is certainly room for improvement.

“The general public remains largely unaware that road deaths are the third biggest killer in Africa after HIV/Aids and malaria.  In addition, medical help is now available in areas where it has not been in the past but pregnant women are not able to take advantage of healthcare simply because they have no means of transport."

Transaid’s life-saving work in Africa includes providing bus and ambulance driver training and an Emergency Transport Scheme (ETS) which encourages local taxi drivers to transport pregnant women from their village to the nearest health facility for free so they can access vital healthcare.

McFaull believes the UK’s transport industry has an opportunity to make a significant difference to their work - both financially and through offering expertise. He is also keen that more individual staff within organisations act as ambassadors for the charity, garnering support among colleagues.

He said: “On the whole charity supporters like to raise funds or offer sponsorship for something tangible – to pay for a hospital, a course of drugs, or a vehicle for example. Many don’t stop to think about the need for training and infrastructure. That’s where our industry can make a real difference to Transaid.

“We understand the importance of driver training and transport management which is why we should vehemently support Transaid’s projects and courses, and encourage our colleagues to do the same. A little effort in the UK goes a long way to solving problems in Africa and we all know this charity works tirelessly to that end."

Later this month McFaull will meet the charity’s patron, Her Royal Highness The Princess Royal, to discuss plans for the future.

He said: “We are very lucky to have HRH The Princess Royal backing us. She inspired the formation of the charity 12 years ago and is still very involved. She frequently challenges us to improve and extend our remit and we are very grateful for her support.”