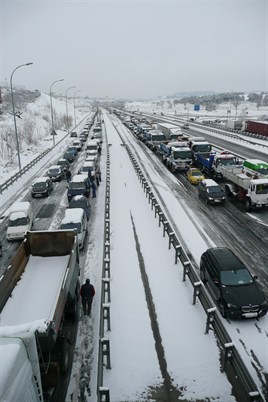 With fresh snowfalls affecting transport networks, many manufacturers are seeking contingencies in order to keep their supply chains moving. Goods from suppliers in continental Europe became stranded mid-route during the most recent onslaught of severe weather, or in some cases were not despatched, causing chaos at many production sites.

Evolution has already completed unusually high numbers of emergency deliveries in this month’s snow using a variety of transport modes including helicopters, express air freight and dedicated sprinter vans. As roads became impassable in the snow, the team experienced a surge in demand for air freight and air charter. Demand in the air charter market was exceptionally high, often threatening to outstrip supply, however, Evolution was able to call upon its extensive network of logistics contacts to source aircraft in order to meet tight delivery schedules.

“Even chartered flights are not immune to weather delays,” continues Brennan. “Wings still need to be de-iced as with commercial aircraft, potentially adding time to the overall journey. In some extreme cases, severe weather even resulted in aircraft in more exposed areas having to fly to another airfield for loading, as deliveries could not reach airfields in more exposed areas. This reduced the availability of aircraft even further.”

Brennan also highlights that when major airports are forced to close, the knock-on effect of closures puts pressure on regional airports in the vicinity. This can present an additional challenge in that regional airports may be difficult to access in poor weather.

“Sending goods via onboard courier has been another good option in the recent transport chaos,” comments Brennan. “This is particularly effective for smaller deliveries, or where a part-delivery is enough to maintain production. Although more expensive than air freight, onboard courier material carries a higher priority on an aircraft than cargo, and therefore offers a greater certainty of delivery when capacity is tight.”

The Channel Tunnel has also been particularly busy during December’s arctic weather conditions, as delays at ports have led to more shipments being moved via the tunnel. With the snow and ice already wreaking havoc on European roads, weather-related traffic issues on the UK side of the Channel have caused further headaches in transporting components to UK manufacturing sites.

“Diverting trucks to waiting helicopters has worked well to counter this problem,” explains Brennan. “We have been able to deliver enough components to customers’ manufacturing sites for them to maintain production until a truck could reach their premises.”

Many supply chains are operated via milk-run, providing a single consolidated delivery for the importer. When milk-runs are interrupted by severe weather, being able to access local dedicated transport close to the supplier is crucial.

“Finally, information flow is vital to supply chain managers at the best of times, and even more so during extraordinary situations,” concludes Brennan. “Our 24/7 customer support team stays in close contact with customers for the duration of emergency deliveries in order to provide accurate updates on estimated arrival times. We also make sure that we have a full team present to help with customer requests by hiring 4x4 vehicles to transport personnel in remote, snowbound areas to our headquarters at East Midlands Airport.”