A s we saw last month, Ford has continued to increase its lead at the top of the table over Vauxhall. An interesting sidelight on that issue came from a top Ford executive, who confided: “We have to get our people to stop thinking about battling Vauxhall. That isn’t the point – the point is Volkswagen.”

His observation was well-made. On both a global and pan-European basis the larger VW group is a much bigger threat to Ford than GM. In Britain, Ford and Vauxhall used to be the Manchester United and Liverpool of the automotive business, but times have changed. Ford does not want to battle over discounts with Vauxhall, it wants some of VW’s brand magic.

Below the Ford/GM/VW battle, the question of the moment – what happens to Toyota, the other great global player – is still unanswered. Fleet sales are down by 17% YTD, which is serious, but hardly terminal.

It remains to be seen how much long-term damage will be done by the recall affair.
Many current Toyota drivers are likely to stay defiantly loyal (after all, virtually none of them have actually experienced the accelerator pedal problem, so widely discussed in the media), but attracting new customers to the brand is going to be an issue in the short term.

Meanwhile, the French are making a determined fightback but, unfortunately, the same cannot be said of the Italians. Fiat and Alfa have almost slipped off the radar. Fiat, in particular, is a mainstream brand, yet it is being outsold in the fleet market by the likes of Land Rover and Mini.

Fiat can point to the model changeover of the Punto from Grande to Evo, but that shows up just how narrow its model range is in the UK – basically just the Panda, 500 and Punto register in the minds of UK fleets. Similarly, Alfa has high hopes with the Mito, but then it needs to, as the other models are doing so little business.

On the subject of models, it is startling just how fleet-dependent some models are, given that so many manufacturers talk about how they are chasing retail customers.

At the top (or bottom) of the table is the Seat Exeo, with 95% of sales so far this year going to fleets.

The Ford Mondeo has a 90% fleet sales mix and even the Focus, not an unreasonable car for a private buyer, has an 83% fleet mix.

More strangely, the Vauxhall Meriva has the same 83% mix – clearly, a lot of retail-oriented Merivas need to be got rid of before the Mark Two model is introduced.
Even the VW Golf, the lower-medium model most associated with middle class private buyers, is 64% fleet.

The positioning may be all about aspirational individuals buying into the Golf heritage, but that conceals a far less glamorous demographic of company car drivers. No wonder Ford thinks: “If they can be both fleet and aspirational, why can’t we?” 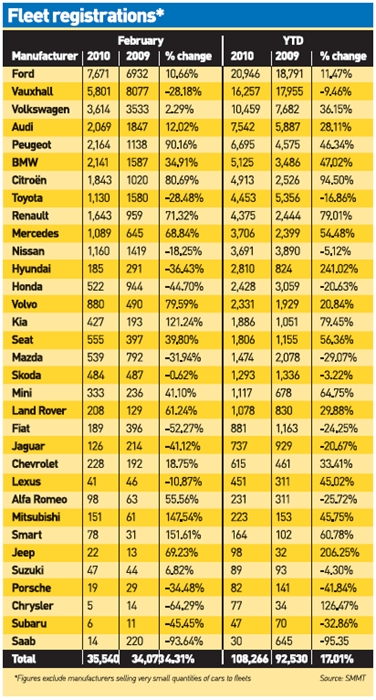