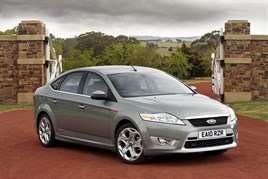 Ford cars will start becoming cheaper for company car drivers as the company tries to narrow the gap between list prices and transaction prices.

The company announced today that prices on S-MAX, Galaxy and Mondeo models will be up to £3500 lower than after four successive increases during 2009, and combined with upgraded engines should result in significantly lower company car tax bills for drivers.

Ford claims the new lower prices reflect the value of some of the retail incentives offered on cars leading up to the March registration plate change.

"That formula served us well in the past," he added, "But today's web-savvy consumer is better equipped to shop around and we have to make it absolutely clear that our own dealers are the best place to start for the keenest deals."

It is unlikely that transaction prices will change, but Ford says more than 70% of its large cars are liable to company car tax, so reducing the P11D values was crucial to remaining competitive.