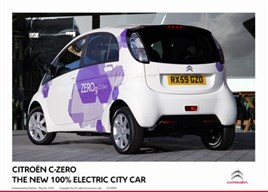 The Citroën Stand at the 80th Geneva International Motor Show showcases the very best of the Company's ‘Créative Technologie' - with some exciting new concept models and product developments exhibited alongside examples from Citroën's award-winning vehicle range.

An expression of automotive luxury and elegance, this new concept stands out with glossy golden paintwork and brushed chrome trim that accentuate the car's flowing lines. Respectful to the environment, DS HIGH RIDER's ‘Full Hybrid' diesel drivetrain combines a refined HDi engine under the bonnet with an electric motor on the rear axle - allowing the car to travel in ZEV (Zero Emission Vehicle) mode.

Developed by Citroën Racing - the winning team behind five WRC manufacturer's titles and six driver's titles for Sébastien Loeb and Daniel Elena - the 200hp DS3 Racing is a special edition with a 100% sporting pedigree. Planned for launch in the second half of 2010, the exclusive DS3 Racing will be limited to just 1000 production units.

The preview model on display at the show has all the attributes of a full-blooded racer, such as a carbon-finished components, specialist motorsports equipment and vibrant two-tone colour scheme with racing decals. Citroën Racing has also boosted the power of the car's 1.6-litre engine to 200hp and developed the chassis and running gear for higher precision control and intense driving sensations.

A blend of high-fashion style and extravagance with motor-racing punch, SURVOLT takes the essence of Citroën's REVOLTE concept - performance, cutting-edge technology and luxury - and adds an assertive sporting dimension. A new breed of stylish, sporty and elegant supermini, SURVOLT bucks current trends and points towards the future of sleek coupés, uniting sophisticated style with sporting passion and an environmentally-conscious all-electric drivetrain.

First shown at the 2009 Frankfurt Motor Show, Citroën's REVOLTE concept will be exhibited alongside the new SURVOLT to highlight the revolutionary exploration in design that Citroën is currently undertaking.

A new C3 Picasso demonstration model at the show, powered by a 1.6HDi engine with an automated manual gearbox, introduces Citroën's new environmental signature - e-HDi. This new signature will be worn by production models fitted with innovative technologies such as the new generation of Citroën's micro-hybrid Stop & Start system. This technology recharges the battery when the car slows down or brakes, reducing fuel consumption and CO2 emissions.

This C3 Picasso e-HDi showcases even more of Citroën's latest environmental technologies. The demonstration vehicle is fitted with 70 160W photovoltaic cells on its polycarbonate roof, which help recharge the battery - reducing the use of the alternator and saving more fuel. The car also features a higher proportion of ‘green' materials, at nearly 20%. Ecologically considerate components include the floor mats, seat foam, wheel trims and fuel tank. The brand's objective in 2011 is to use 20% ‘green' materials on each of its new models.

Planned for launch in the last quarter of 2010, and a full production reality, Citroën's new all-electric C-ZERO will also be on display. C-ZERO is perfectly adapted to the needs of all kinds of users - including public sector operators, local authorities, smaller businesses and company fleets - and also to those of private customers looking for a car with exceptionally low running costs. Perfect timing then, as the UK Government has just announced that, from the start of 2011, customers will be able to reclaim up to £5,000 of the up-front cost of owning Citroën's new 100% electric car.

The 80th Geneva Motor Show also marks the 40th anniversary of the SM, which debuted at the show on 11th March 1970. This legendary Citroën GT went on to become one of the finest on-road vehicles of its time - thanks to its impressive performance and renowned ‘magic-carpet' ride.