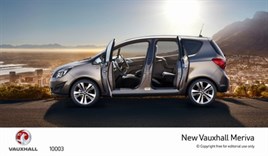 Vauxhall has unveiled two cars at this year's Geneva Motor Show, with world premieres of the Flextreme GT/E concept and the all-new Meriva compact MPV.

While the Flextreme GT/E provides an insight into Vauxhall's commitment to environmental technology, the new Meriva illustrates how innovation from a previous concept car has become a production reality.

Also at the show is the groundbreaking Ampera extended-range electric vehicle, which is due on sale in the UK at the start of 2012, and is set to establish Vauxhall's lead in alternative propulsion in the family car segment.

Last but not least, the refreshed Corsa is on show, with its revised powertrain and chassis making Vauxhall's best-seller not only cleaner and cheaper to run, but also more fun to drive, too.

‘Vauxhall is covering all bases at Geneva,' said Duncan Aldred, Vauxhall's Managing Director. ‘With the Meriva, we have a unique and innovative take on family motoring, but the concept car and Ampera prove that we are truly at the forefront of environmental technology. These vehicles also show that their versatility and efficiency doesn't come at the expense of stunning design.'

In Vauxhall's commitment to achieving power without the need for fossil fuels, electricity plays a key role, and the 4.7-metre long Flextreme GT/E concept illustrates how extended-range electric vehicle (E-REV) technology can be plugged into large or mid-sized vehicles, as well as compact cars, like the upcoming Ampera.

Vauxhall calls its strategy ‘e-mobility unlimited', which will effectively adapt the highly efficient E-REV drive system - which removes the limitations of battery-only power - to vehicles across all market segments. In other words, the Flextreme GT/E concept shows that size really doesn't matter when it comes to driving a car with zero CO2 emissions.

Sleek and aerodynamic, the Flextreme GT/E achieves a projected drag co-efficient of just 0.22, allowing it to reach an estimated top speed of 125mph-plus while conserving energy and extending the driving range. Stand-out visual features include a low, wide stance, wing-shaped lights front and rear, a distinctive nose and grille, ‘floating' C-pillars and muscular, sculptured bodywork.

The clean frontal styling features a low bonnet line and an extended nose section, which is clasped by wing-shaped, signature LED headlamps, which are in turn carved into the front wings and across the bonnet line. The new trapezoidal grille is slim but bold, with the prominent wing-shaped chrome bar carrying a large Vauxhall emblem, which doubles as a socket for charging the Flextreme GT/E's battery pack.

The Flextreme GT/E concept is a logical next step towards Vauxhall's emerging strategy for the electrification of the car, which will in time include products using battery, extended-range, hybrid and fuel cell technologies.

Vauxhall's new Meriva is set to turn the conventional concept of family-car usability on its head with a combination of clever, rear-hinged back doors which radically improve access/egress, and a raft of unique cabin features that boost interior versatility.

The Meriva's FlexDoors are rear-hinged back doors which swing open towards the back of the car at an angle of nearly 90 degrees, vastly improving the ease with which occupants enter and leave the cabin - a major benefit for both parents with young children, as well as older people.

But this isn't the Meriva's only innovation. FlexRail transforms the conventional centre console into a convenient and adaptable storage area for a wide range of everyday items, from handbags and colouring books to MP3s and sunglasses.

Complementing FlexRail is the Meriva's clever FlexSpace seating system, which offers a range of cabin configurations without having to remove any of the seats. Both its outer rear seats can be moved fore and aft individually, and also slide inwards to provide more shoulder width and leg room.

The Meriva's flexibility is enhanced by an expressive and dynamic silhouette to its basic cab-forward design. Like the Astra and Insignia, a ‘blade' features down the side of the body, complementing a window line with a distinct ‘wave' accentuating the FlexDoors, which also offers enhanced visibility for children.

With six turbocharged powertrains available, Meriva buyers will have a choice of power outputs ranging from 75-140PS, including a high-mpg/low-C02 ecoFLEX model.

The new Meriva will be available in UK showrooms in June.

The five-door, four-seater Vauxhall Ampera is on schedule to go into production late next year. It carries the same design DNA as the new Astra and Car of the Year-winning Insignia, yet it uses groundbreaking extended-range electric vehicle (E-REV) technology.

Unlike other conventional propulsion systems, E-REV uses electricity as its primary power source, supplemented by a small engine to generate electricity for its motors when electric power runs low. This helps the Ampera overcome the ‘range anxiety' issues associated with pure electric cars.

The Ampera's wheels are turned electrically at all times and speeds, and for journeys of up to 40 miles (covering a vast majority of typical commutes) it runs on electricity stored in the 16-kWh, lithium-ion battery, and emits neither greenhouse gases nor other harmful emissions.

The Vauxhall Corsa is set to sell more sub-125g cars than any other model range in the UK this year, due to significant efficiency gains in its engine line-up. The ultra-economical units - all of which, bar the VXR model, exceed 50mpg combined when fitted with a manual gearbox - are joined by a raft of improvements to the Corsa's chassis, boosting its driver appeal still further. The economy star of the range is the latest ecoFLEX model, which not only gains 20PS of power, but also achieves a combined 76.3mpg and emissions of just 98g/km.