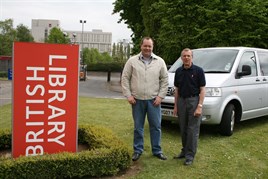 The British Library operates a fleet of three Volkswagen Transporters and a Skoda Fabia Greenline Estate car from its Boston Spa, West Yorkshire premises, travelling some 100,000 miles a year.

The Volkswagen Transporters carry a maximum of one driver and eight passengers and are used for transporting members of staff, visitors and contractors between the Boston Spa site and various destinations within the York, Leeds and Wetherby areas.

The Library purchasing policy means that all vehicles are equipped with ABS brakes, as well as stability and traction controls, with crash ratings under the European New Car Assessment Programme also critical.

And, given that driver fatigue is one of the biggest killers on the UK’s roads - about 300 people are killed each year as a result of drivers falling asleep at the wheel according to Department for Transport statistics - the Library places a significant priority on managing tiredness.

Consequently, some staff are designated ‘as and when’ drivers who are called on to help the driving team particularly during early mornings and late evenings to ensure full-time drivers do not breach the terms of their 36-hour working week with a culture of long hours not tolerated for safety reasons.

Key fleet performance indicators include cost efficiency of the transport and distribution service fleet against equivalent taxi costs and the number of people using the official vehicles, which last year peaked at more than 800 a month.

Since April 2007, the Library’s Transport and Distribution Department has achieved an efficiency rating significantly better than the taxi costs, which has, in effect, generated savings every month. Department running costs, which include vehicle depreciation, fuel purchasing, maintenance costs and insurance for the last 12 months were £82,506.65, compared to the equivalent taxi cost calculated at £115,360.

The Library’s policy and procedures for work-related road safety are laid down in a Fleet Policy and Duty of Care document compiled by transport and distribution manager David Fisher.

“The British Library places great importance on work-related road safety. By spending time educating and training its drivers the already high standard of their driving has improved even further.

“There has been only one road traffic incident in the last four years and that was a non-blameworthy accident last winter.