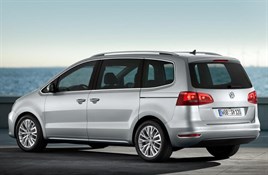 Volkswagen is promising class-leading fuel consumption of more than 50mpg when it launches the new Sharan later this year.

The new model will be larger but lighter than the outgoing Sharan, and it will launch with a choice of 140bhp or 170bhp 2.0 TDI diesel, and 150bhp or 200bhp 2.0 TSI petrol engines.

All versions are offered with a DSG auto option, except the 200bhp 2.0 TSI where it is the only transmission.

The 140bhp diesel model achieves 51.4mpg on the combined cycle and has CO2 emissions of 143g/km.

The Sharan will feature stop-start technology to help save fuel and reduce CO2 emissions, while new features also include sliding rear passenger doors.

Also new for this version are fold-flat seats for the second row, while all models will feature air conditioning, electronic stability control and seven airbags as standard.