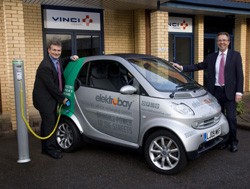 The Department for Business has announced that six successful bidders will share £660,000 match funding from the Department for gas refuelling or electric vehicle charging infrastructure projects.

The six include a private business in Essex, three councils across Yorkshire and the West Midlands, a public body co-ordinating transport in Merseyside and a community group on the Isle of Lewis.

The bidders are all winners in the latest round of support from the Alternative Fuels Infrastructure Grant Programme.

Business Minister Mark Prisk said: "This funding is part of our commitment to build a low-carbon economy which will boost economic growth as well as help meet our ambitious climate change targets.

"It is one of the ways we are supporting changes in consumer behaviour that will drive the shift towards low carbon vehicle technologies.”

The £660k BIS funding is in addition to the £500k already committed by the Department for Transport earlier in the year.

The funding under the Infrastructure Grant Programme, run for the Government by Cenex, has been allocated in response to applications for funding in three separate funding 'windows', with the final window closing in March 2010.

Plans for a fourth call for funding have been cancelled.