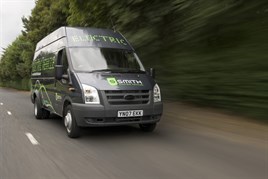 However, Ford has signed an agreement with Azure Dynamics Corporation to bring an EV Transit to Europe. The aim is to deliver a pure battery electric version of the Ford Transit Connect by late summer 2011.

Azure already develops hybrid electric and electric drive technology for shuttle buses and commercial trucks in the US, including the Balance Hybrid Electric, which is built on a Ford E-450 cutaway.

“Personally, I think there is a limited market for battery-powered commercial vehicles, but there will be some customers that want it and it’s important we have an option for them,” said Clary.

Ensuring every aspect of the market is covered has helped keep Transit as the market leader for the past 45 years and made it Britain’s best seller so far this year with more 23,000 Transits sold in the first six months.

It has sold 12,419 units in the one tonne Transit segment and 9,258 units in the two tonne segment – equating to more than one in three of all sales.

It’s also introducing the new Transit and Connect Leader series this quarter which will give companies access to new value models at £11,995 and £9,995 respectively.