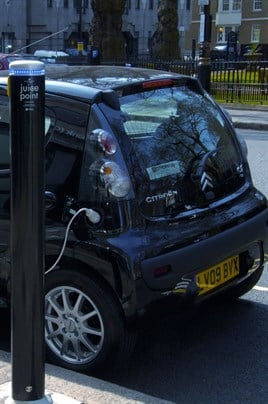 Hundreds of charging posts will start to be installed in the next few months after five more areas were awarded Plugged-In Places funding.

The Midlands, Greater Manchester, East of England, Scotland and Northern Ireland will each receive a share of £20 million to help install 4,000 charging points.

They join round one winners London, Milton Keynes and the North East which will be installing more than 11,000 charging posts.

London’s city-wide electric vehicle charging network Source London will launch in the spring and will deliver 1,300 public charging points across London by 2013.

The Source London network will allow members to charge their vehicles at any one of these public charging points for no more than an £100 annual membership fee.

“Through the development of Source London, we are seeking to create the fertile conditions for electric vehicles to flourish to make our city the electric driving capital of Europe,” said the Mayor of London Boris Johnson.

In Milton Keynes, 2,430 charging points will be installed across the town over the next three years. Of these, 2,000 will be in residential areas, while the remainder will be on streets, car parks and in retail and commercial locations.

Meanwhile, the North East aims to have more than 1,300 charging points in place by 2013 in commercial and residential areas.

Round two winners the Midlands is planning to install 500 charging points with the first phase of deployment focussing on Coventry, Birmingham, Worcester, Leicester, Nottingham, Derby, Corby and Northampton over the next two years.

Robert Evans, CEO of Cenex, which led the Midlands consortium in bidding for Plugged-In Places cash, said: “We are looking forward to working with businesses and local authorities across the Midlands in rolling out charge posts to help support the first wave of electric vehicles.”

Elsewhere, Greater Manchester will be deploying 300 charging points, the East of England 1,200 points and 375 in Scotland. Work in installing the Plugged-in Places network will get underway in the spring.