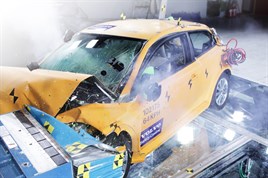 At the Detroit Auto Show 2011 Volvo Cars is spotlighting the important issue of electric car safety in an unusual, but distinctive way.

On the company's stand there is a Volvo C30 Electric that has undergone a frontal collision test at 40 mph (64 km/h).

"Our tests show it is vital to separate the batteries from the electric car's crumple zones to make it as safe as a conventional car. In Detroit we are the first car maker to show the world what a truly safe electric car looks like after a collision with high-speed impact," says Volvo Cars' president and ceo Stefan Jacoby.

With climate change in focus, interest in electric cars has increased considerably. The electric motor is almost four times more energy-efficient than a combustion engine - and if the electric car is recharged using renewable energy it produces virtually no carbon dioxide emissions.

"The C30 Electric meets car buyers' increasing demands for minimised carbon dioxide emissions. However, this can under no circumstances come at the expense of other properties that customers expect of their Volvos. That is why our electric C30 has to be as comfortable, as usable, as fun to drive and as safe as all the other C30 variants," explains Lennart Stegland, director of Volvo Cars' Special Vehicles division.