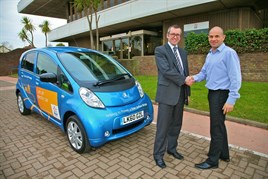 The first Peugeot Ion car in the UK has been sold and delivered to EDF Energy for use in its fleet including testing recharging solutions.

Eric Salomon, energy field services director at EDF Energy, said: “We are delighted to add the first Peugeot Ion in the UK to our fleet. It fits in perfectly with our ambitions to provide low carbon solutions.

“Sustainability is at the heart of EDF Energy and initiatives like this will help us meet the targets set when we announced our Sustainability Commitments, one of the biggest packages of environmental and social measures announced by any British energy company.”

The Peugeot Ion is one of the first of the latest generation four-seat urban electric cars to go on sale in the UK this month. It has a potential range of 93 miles and can be recharged from a standard domestic plug in around six hours, or via a quick charger in under an hour. It is the ever-increasing fossil fuel costs and the need to reduce CO2 emissions which has made electric cars a viable modern alternative option for “urban” transport.

Carried out overnight or during “off-peak hours”, recharging costs can be reduced further and help optimise the use of available low carbon power produced by the electricity supply companies.

As a 100% electric vehicle, it also benefits from a range of further cost savings over a conventional internal combustion engined vehicle including no congestion charges or diesel/petrol costs.

Phil Robson, fleet sales director at Peugeot UK, said: “We are very pleased to be delivering our first Peugeot Ion in the UK to EDF Energy. Electric cars are an important part of future urban mobility, alongside hybrid vehicles and highly efficient diesel and petrol engines. As well as the all electric Peugeot Ion, we will also this year launch the world’s first diesel hybrid vehicle the 3008 HYbrid4, new e-HDi micro hybrid technology and later a range of highly efficient three cylinder petrol engines. Together these new vehicles will help reduce CO2 emissions and reduce customers’ motoring costs.”