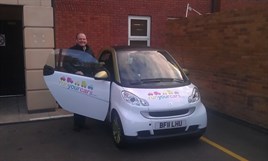 A company car driver is out to prove that electric vehicles are a viable fleet proposition and simultaneously raise money for charity.

Craig Pullen, systems development manager at specialist fleet services provider RunYourCars, has been driving a Smart Fortwo electric car for more than six months and has clocked up more than 5,000 miles.
However, journeys to date have been local commuter-type trips. But with the advent of the Ecotricity ‘Electric Highway’, which sees electric vehicle charging bays located at motorway service stations nationwide, Mr Pullen is hoping to overcome range issues which many drivers associate with electric vehicles.

During the weekend of November 12 and 13 he is planning to make a return journey from Run Your Cars office in Henley-in-Arden near Birmingham via Oxford and London by using charging stations on the M40 (Oxford Services), M25 (South Mimms) and M1 (Newport Pagnell Services).

Planning a round trip of some 300 miles, Pullen said: “I have successfully used the Smart electric car locally, and thought that the advent of the ‘Electric Highway’ would provide a good opportunity to disprove some of the myths associated with electric vehicles - notably range anxiety.”

“We receive a lot of enquiries about electric vehicles and my experiment will further add to our pool of knowledge and experience. I hope to be able to prove that Birmingham, Oxford and London are fully connected via the ‘Electric Highway’.”

He is able to drive approximately 80 miles on a full charge and for longer journeys when recharging has not been possible en route or at his destination has hired a petrol or diesel car.

Pullen explained: “Driver and vehicle flexibility is key when companies are establishing their fleet policies. We believe that electric cars and vans have a place on a vehicle fleet, but usage has to be managed.

“Use of the Smart is delivering significant fuel savings and reducing our carbon footprint, but Run Your Cars is flexible enough to realise that it is not the end of the road for the combustion engine. We believe the two power sources can operate side-by-side within most fleet operations.”

Ecotricity PR manager Mike Cheshire said: “We hope that Craig’s commuting round-trip will help to show people that electric vehicles are not only green but that travelling by electric vehicle is getting more and more practical. It’s great to see industry leaders such as Craig promoting the everyday potentials of green transport. As an expert in the motoring field, he is a key driver of change.

“The ‘Electric Highway’ is providing the infrastructure to get Britain’s electric car revolution moving and will reduce carbon emissions at a time when petrol prices are sky-high. It costs just over 1p per mile to travel in an electric vehicle, compared to around 15p per mile in a petrol car.”

He added: “Electric cars can top-up in as little as 20 minutes using our rapid recharge points which are powered with 100% green energy made at Ecotricity’s wind and solar parks across the UK.

“Ecotricity fully agrees with Craig and his team that it’s time for a change in attitude towards transport in Britain. It is great to see him spreading the message that this change doesn’t have to mean a sacrifice in cost or convenience.

“We wish Craig the best of luck with his trip and hope that he will inspire more motorists to embrace the potentials of emissions-free, electric travel.”