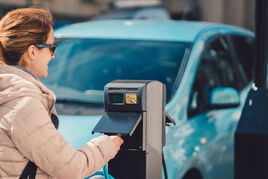 The Government has been offering motorists a £5,000 grant to offset the additional costs of acquiring an electric vehicle since January.

But the incentive has failed to ignite the imagination of car buyers, with the latest figures revealing only 786 grants have been awarded so far.

In the UK today, there are 3,100 vehicles being used by 160,000 car club members and as the largest independent operator City Car Club has experienced a combined annual growth rate of 64% in the past three years.

Finlayson said: “I think that there’s a good opportunity for manufacturers to be able to work with rental companies and car sharing clubs to showcase their vehicles.”

In fact, manufacturers have already realised the potential of car clubs with Peugeot, Volkswagen, Peugeot and Daimler all entering the fray.

Meanwhile, Autolib – a recently launched rental scheme in Paris – gives people access to more than 60 EVs which can be picked up and dropped off at a number of rental kiosks in the city. The program, which is being spearheaded by Bolloré, IER and Microlise, aims to have around 3,000 EVs in operation by the end of 2012.

In addition, Daimler’s ‘Car2Go’ will be launching its first full EV car sharing operation in Amsterdam by the end of the year - a 500 EV operation.

Finlayson concluded: “More and more manufacturers are moving into the mobility platform that car sharing and car clubs provide and that will only increase in the years to come.”