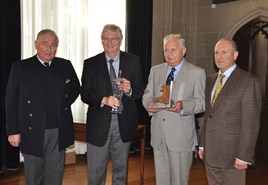 Former Vauxhall managing director Nick Reilly as current Vauxhall chairman Bill Parfitt have been presented with awards for their achievements in the automotive industry.

Reilly, who will retire as president of General Motors Europe in March 2012, received the highest honour bestowed by Welsh Motoring Writers, the Tom Pryce Memorial Trophy, named after the Welsh Formula One driver who died tragically in 1997.

Anglesey-born Reilly said: “Receiving this prestigious and striking award from Welsh Motoring Writers is an honour, made even more special in a ceremony within a few miles of my birthplace. This weekend with media friends in my home country will find a special place in my memories of a long career in the motor industry.”

Parfitt was presented with the Automotive Achievement Award for transforming the fortunes of Vauxhall and for remaining committed to automotive component suppliers in Wales.

He said: “To receive such an accolade, particularly from journalists in Wales, issuperb. I spent my formative business years in the Principality and have consistently championed the industry and its supply chain here. This Welsh award for Automotive Achievement is a distinct and memorable moment in my career.”