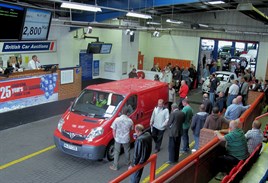 While the October figure of £4,301 slipped against September’s £4,409, average values remain well ahead of those seen earlier in 2011.

Model mix is the most likely source of the month-on-month drop in the headline figure, as both the fleet/lease and dealer part-exchange sectors recorded improved values compared to September, with just the nearly-new sector declining.

With stock in even shorter supply – October volumes were 5% down on September – the ongoing strong buyer demand ensured conversion rates remained at high levels, with many vendors continuing to enjoy 100% conversions in individual sales sections.

Performance against guide prices remained exceptionally strong, with values across the board averaging 103% in October, with all three sectors of fleet/lease, dealer part-exchange and nearly-new achieving well over 100% for the third month running. Year-on-year values are ahead by £122, equivalent to a 2.9% improvement.#

Duncan Ward BCA’s general manager, Commercial Vehicles, said: “The continuing gap between supply and demand is keeping values firm. In review much of 2011 has seen exceptional values for used LCVs, particularly in the spring when the market was flooded with liquidation stock. The third quarter was extraordinary, with sustained demand through the holiday period, even with lacklustre business confidence and Stock Market wobbles and there are signs that values are likely to remain strong into the New Year.

“However, we are still seeing far too many vehicles entering the remarketing chain with high levels of damage which reduces their desirability and value to used buyers.

“While everyone accepts a van is a working tool, we see examples of basic negligence every day that have a real financial impact for vehicle owners. As vans are often staying in service longer, some additional decline in condition is inevitable, but often steps can be taken to ‘manage damage’. Driver training, a culture to report and repair damage and independent in-service inspections are all examples of good practice that can make a real difference.”