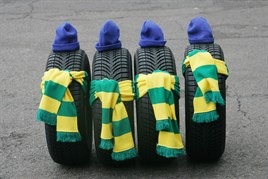 Cold weather tyre sales have quadrupled in the build-up to winter 2011/2012, says ATS Euromaster, with strong demand nationwide from private motorists and fleets.

Between September and November 2011 ATS Euromaster saw a 301 per cent rise in the number of cold weather tyres fitted to cars, 4x4s and vans, compared with the same period in 2010. Early indications suggest that sales are continuing to climb during December, with demand reaching unprecedented levels in parts of the country already affected by snow and ice.

Huw Williams, group marketing director at ATS Euromaster, says: “This year we worked hard to secure significantly more stock and it’s enabled us to meet the exceptionally strong demand. We still have cold weather tyres available in many different sizes; however, it’s a continually changing situation and we’re yet to see sales reach their peak.

“If the current snowfall drifts further south, then availability could change overnight. Our advice remains to secure any cold weather tyres you require now,” he adds.

Last year ATS Euromaster transformed the UK’s cold weather tyre market when it became the first national tyre specialist to launch a fully-managed cold weather tyre service for car and van fleets. This resulted in a 955 per cent rise in its sale of seasonal fitments during winter 2010/2011, compared with the previous year.

Williams adds: “Fitting cold weather tyres can instantly transform the handling of a car or van throughout the winter period. Even with a 4x4, there is no guarantee of being able to brake on ice or maintain traction on a snow covered road if it’s fitted with standard tyres. Whatever vehicle you drive, if you’re not on the right rubber for the conditions, you risk running into trouble, not to mention the person in front.

“Cold weather tyres are a worthy investment, which in many cases will last for several winters. And contrary to popular belief they won’t double your tyre costs, as you’re only causing wear to one set of tyres at a time, so total tyre wear doesn’t increase.

“If there’s a slight cost to the purchase of the tyres, fitting, and out-of-season storage in a tyre hotel, that can be measured against increased safety, mobility, productivity and peace of mind.”