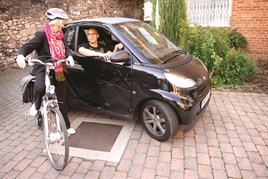 An innovative scheme is helping to deliver thousands of pounds worth of savings by persuading health professionals to leave their cars at home.

They are being given access to low emission pool cars and electric bikes through a sustainable travel project called GoLow, which after a successful pilot could now be rolled out to other public sector organisations.

The Avon and Wiltshire Mental Health Partnership NHS Trust (AWP) has around 3,500 staff, with a large number working to provide community health services in the south west of England.

However, a report from the Energy Saving Trust (EST) last year revealed that 93% of the Trust’s business travel was being undertaken in grey fleet vehicles.

That equated to an annual total of 4.2 million miles at a cost of £2.5 million.

The EST report revealed that staff owned vehicles being used in the Trust were on average more than 11-years-old, with average CO2 emissions of over 200g/km.

In addition, more than 50% of the Trust’s business mileage was being claimed by staff who undertook less than 3,500 miles per annum.

“This indicated that the Trust was supporting an inefficient system which was creating an environmental impact within the communities it serves,” says Pierre Fox, sustainable travel project manager.

The AWP Trust is currently developing a full travel strategy, with the aim of reducing the expenditure to £1.8 million by 2014.

“However, these measures alone may only create a very small impact on the huge business mileage in the organisation,” explains Fox.

The travel planning in the Trust has included trials of some alternative options, with access offered to the local car club and low emission pool cars, while an electric car was tested and some electric bikes were purchased.

Fox admits that while these trials demonstrated a lot of potential, there were challenges over the cost of the car club and the expense of electric vehicles.

However, with staff on the ground prepared to embrace a different approach to business travel, Fox realised that a radical shift could still be achieved.

He decided to concentrate on procuring a fleet of low emission cars rather than electric vehicles and ensure the electric bikes would be robust enough for the daily grind.

In May 2010, a fleet of 22 low emission pool cars was gradually introduced across eight community sites in Bristol and with support from Bristol City Council and the Cycle City team a number of secure cycle facilities were erected to house a fleet of 20 electric bikes.

Any problems of running a fleet of pool electric bikes were overcome by working closely with the Giant Cycle Corporation and the lease company Sustainable Travel Solutions.

“This has allowed the development of a cycle product that is well suited to the demands of pool use backed-up by a very responsive aftercare service and a network of dealerships,” says Fox.

So far, the existing 22 pool cars are projected to save the Trust £20,284 per annum, while transferring staff to low emission pool cars has results in cutting carbon emissions by 55.6% per mile.

“The pilot has demonstrated that it has been possible to create significant savings compared to paying staff mileage expenses,” says Fox.

In three months, one team achieved a 60% reduction in average monthly expense claims, down from 171 to 69 miles. At over 50p per mile the savings are beginning to add up.

Building on a successful pilot

Plans are now being discussed as to how the pilot scheme can be expanded further to include other public sector bodies in the Bristol area.

A dedicated website - www.golow.org.uk – is being developed, to allow users to book their transport needs online.

The cars will be managed by a telematic car share system hosted by Commonwheels social enterprise car club, while the bikes will be integrated into the system via a product being developed by Blackbox Telematics.

“The intention is to create a high profile, intensively managed service which will be able to make a real impact to reducing emissions and cost,” says Fox.

It’s also proposed that the business model be expanded to give access to other organisations, which would be run as a social enterprise.

Bristol City Council discussed the scheme’s merits last week at an event hosted by the sustainable development agency Forum for the Future to look at solutions for sustainable work-based travel.

Councillor Gary Hopkins, cabinet member for Strategic Transport, Waste and Targeted Improvement, said: “We need a sustainable solution which inspires other organisations and businesses with its simplicity and sustainability.

“Bristol is a forward thinking city and it does business in a way which reflects that.

“The future is low-carbon, fuel-efficient, less car miles, more cycling and walking. Staff travel should reflect this and the council and public sector should lead the way. I applaud any sustainable transport initiative that avoids the extra mile.”