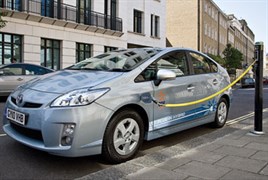 A new survey together with an in-depth report on the hybrid and EV market has revealed that the £5,000 Plug In Car Grant is essential if businesses are to continue investing in low or zero emission vehicles.

Private and business buyers of EVs are now eligible for up to 25% off the cost of a plug-in car, limited to £5,000. However, the Government intendeds to review the £43m fund in 12 months time, spelling long- term uncertainty for firms looking to invest now.

A poll by Lex Autolease reveals that almost half of financial directors (47%) would not pursue their company's interest in electric vehicles, or plug-in hybrids, if the subsidy was removed.

Chris Chandler, principle consultant at Lex Autolease, says: "We've published the actual cost of ownership figures in a new guide, which clearly shows that the subsidy is vital to ensuring these vehicles are cost competitive. Without it, new EVs such as the Nissan Leaf can't compete with the likes of a diesel Golf or even the Toyota Prius on cost.

"Businesses are sending out a clear signal that their interest in electric vehicles could be seriously diminished without the subsidy. Particularly if future changes mean the numbers no longer stack up."

In contrast, only 2% would be enticed by a discount or subsidy, whereas almost half (43%) said that low or zero company car tax would make them want to choose a plug-in hybrid or fully electric vehicle.

Chris Chandler adds: "This spells the way forward for the future of business car taxation, which is essentially more of the same. The current system rewards those who choose clean and frugal vehicles and it has been working well since 2002.

"However with long vehicle replacement cycles the industry needs plenty of advanced notice and a longer term commitment from Government to allow them to adopt these new technologies. Given the scale of the investment by manufacturers, the industry can't afford for this to be a flash in the pan like scrappage."