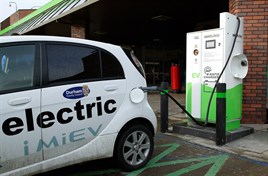 Elektromotive has been commissioned to install the UK’s largest network of publicly accessible high-speed charging units for electric vehicles (EVs).

Eight of the company’s new Rapid Charge Elektrobays will be installed across North East England as part of an initiative, led by the One North East regional development agency, to install more than 1,000 charging stations across the region within the next three years.

The first Rapid Charge Elektrobay has been installed at The Metro Centre, Gateshead. With a direct current of 50kW, it can charge the battery of a compatible EV – such as a Nissan Leaf or Mitsubishi i-MiEV – to 80% of its capacity in just 20 minutes, compared to around seven hours if using a conventional domestic power supply.

One North East is on the lookout for more locations to install the other Rapid Charge Elektrobays. These locations should be easily accessible and ideally close to main roads and conurbations where they will be of most use to drivers wishing to recharge their vehicles. Any business or organisation located on or near the major trunk roads and spine roads in the North East are invited to put themselves forward.

This infrastructure work is part of the Office for Low Emission Vehicles (OLEV) 'Plugged-In Places' initiative, which is helping to establish electric vehicle recharging infrastructure in key strategic locations around the UK.

“Reducing battery charging times is crucial to a successful adoption of EVs,” said Calvey Taylor-Haw, managing director of Elektromotive. “We co-developed the Rapid Charge Elektrobay to quickly extend a vehicle’s range. This will help reduce range anxiety, which has the potential to undermine demand for EVs.

"While battery manufacturers continue their efforts to increase range, the Rapid Charge Elektrobay offers an immediate solution for owners of the new EVs that are compatible with this charging technology.”