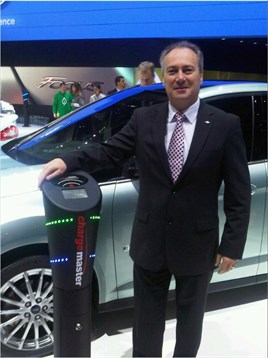 Chargemaster Plc showcased its new CombiCharge charging unit with the new Ford Focus Electric at the Geneva Motor Show, which will be launched next year. In addition, Chargemaster CombiCharge Units have been deployed in Hillingdon, West London in support of a Ford demonstration project.

In a joint venture between Ford, Hillingdon Council, Scottish and Southern Energy (“SSE”), and the Technology Strategy Board (“TSB”), Chargemaster was chosen as the primary provider of electric charging posts to be installed across the London Borough of Hillingdon.

This network of charging posts are managed by Chargemaster’s online backend management system, Chargevision, which provides real time live information on electricity consumption, allowing for greater research capabilities for Ford, TSB and Hillingdon Council, who will be able to collate the information to determine the results of the trial. The Chargevision system also gives motorists access to a real time interactive map showing the precise locations and availability of the charge posts.

In total, fourteen CombiCharge charging posts have been installed by SSE, which cater to the two types of charging options available; fast charge (32 Amp) outlets and standard charge (13 Amp) outlets. These units allow drivers to charge their cars whilst going about their daily routine with a full recharge time of three hours.

David Densley, head of Sustainable Transport for SSE commented "This is the first network of its kind to be installed in the area and can be used by anyone driving an electric vehicle. As well as being a practical resource for people already using such cars, we hope they will spark people’s interest in electric transport and the environmental benefits it could bring in the future. The availability of wide network of charging posts is as crucial as the cars themselves, in that drivers are then able to integrate the vehicles into their daily routines."

The Battery Electric Vehicle (“BEV”) demonstration has been developed with public funding as part of the £25 million Ultra-Low Carbon Vehicle Demonstration from the TSB, which promotes innovative industry-led projects that reduce CO2 while benefitting the country's transport system. It is being run by Hillingdon Council who are responsible the placement of public charging points across the Borough and for sourcing local residents to participate in the demonstration.

David Martell, chief executive of Chargemaster, said: ‘’’We are delighted to have been selected for the Ford project. The state of the art CombiCharge unit enables the electric Fords to be charged at over twice the speed as standard charging whilst also allowing other electric cars to be plugged in at the standard charge rate.”