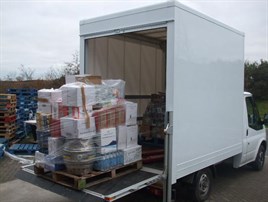 Custom-designed and adapted utility vehicles provided by Pendragon Contracts has enabled the Eden Project to maximise the space and efficiency of their onsite transport and meet the parameters of the funding available.

The requirement was for catering and multi-functional recycling vehicles, demanding adapted bodies that would perform specific tasks. As a result, Pendragon Contracts came up with the design of a short wheel base chassis cab version of a Ford Transit as the ideal platform on which to perform a bespoke body build for each of the modes of transport.

The catering vehicles deliver food to café and restaurant points around the site and also the recently opened café in the town centre. The vehicle body was customised to house six specially-sized roller cages, allowing the loading/unloading of palletised goods via the curtain side - never seen before on such a vehicle - enabling the Eden Project to transport items around the site at 20 mph.

The multi-purpose recycling vehicle is designed to transport four 1100 litre bins around the site. The vehicle was specially adapted to incorporate a flat deck and caging above the sideboards, which greatly increased the vehicle’s capability for the bulk recycling collection of dry goods (cardboard etc). Under-body storage trays were also fixed in place, and filled with spill soil kits and spare recycling bags that can be issued. In addition, broom and shovel carriers were introduced, enabling the equipment to be deployed quickly and efficiently to clear up spillages.

All the vehicles supplied have been fitted with tail lifts, and incorporated within the build were load restraint bars which are easy to operate and add to the security and stability of the load being transported.

John Ryan, transport & warehouse manager, Eden Project, says: “We were really impressed with the way Pendragon Contracts approached the task, as these vehicles do not exist anywhere and had to be built from scratch. As the build progressed we also introduced new requirements to the brief such as roll stops for the tail lift platforms, which the company delivered with ease and flexibility. The lead time was also remarkable, taking just three weeks to build the bodies once the short wheel base chassis cab had been adapted and delivered. The waste neutral team are particularly impressed with their new vehicle; it goes beyond their expectations.”

Mike Roe, head of direct sales, Pendragon Contracts, comments: “This was a really unusual brief, which we relished, as it enabled us to demonstrate our custom service and flexibility. Given the requirements to maximise the efficiency of the vehicles in terms of both space and budget, our team, including our local Evans Halshaw dealership, rose to the challenge and delivered vehicles that meet the Eden Project’s demands superbly.”