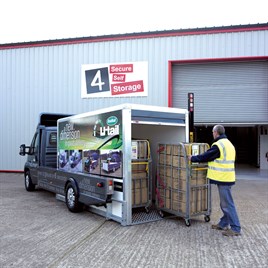 A British company is about to trial a revolutionary new detachable cargo box with Tesco.

The U-Tail from Roadload launched at the CV Show this week and is bolted on to either a modified Peugeot Boxer or Nissan Cabstar chassis. Roadload claims the system will cut costs and alleviate some of the logistics problems faced by LCV fleets.

The chassis is ‘U’ shaped with the wheels, suspension and lifting gear built into its sides, leaving a clear space in the middle for loads to be picked up and lowered to the ground, all within the footprint of the vehicle. Air suspension ensures a smooth ride while providing firm support for cornering.

For pick-up, a driver reverses the U-Tail around a load, which can be a dry freight box, a chiller unit or anything else constructed on the standard load base. A camera in the cab helps the driver manoeuvre the vehicle.

Roadload is based at Thetford in Norfolk and U-Tail was developed in-house. Two prototypes were shown at last year’s CV Show and after further development during the year, the production version is now on offer.

A six-week trial is about to start with Tesco, which is taking on one of each vehicle. Roadload is also in negotiation with other major public sector fleets.

Marketing manager Dennis Vaughan told Fleet News he was delighted to be working with a high-profile fleet and was looking forward to receiving feedback.

“We’re pretty proud of the fact that we began developing U-Tail in February 2010 and by April, at the CV Show, we had two prototypes on display,” said Vaughan.

“Since then we’ve been fine-tuning the system and now we are ready to go. The beauty of U-Tail is that the box can be completely detached from the body, so fleets can save time and money by having several boxes to one vehicle.

“That means reduced loading and unloading time and fleets will be able to have fewer vehicles. For instance, we spoke to a local authority recently which has a vehicle sitting there doing nothing all year full of grit to be transported in the event of a heavy snowfall. It would be much cheaper to have one of our boxes sitting there instead while the vehicle was used for other purposes for the rest of the year.”

The smallest U-Tail is based on the 3.5-tonne GVW Boxer and features a 3.0-litre HDi turbodiesel powerplant offering 157bhp. Load volume goes from 13.0 to 17.8 cubic metres, while payloads are around one tonne. A roller shutter or ‘barn doors’ are available and optional extras include a VanWeigh system to avoid overloading.

A larger version is based on the 4.5-tonne gvw Boxer and has a tachograph fitted while the Cabstar version comes in 7.0-tonne or 8.0-tonne formats.