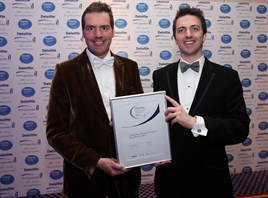 Wilsons Auctions has been named for the second year running as one of Ireland’s ‘Best Managed’ companies in the Deloitte Best Managed Companies Awards.

The Deloitte Best Managed Awards Programme is open to all 32 counties on the island of Ireland and is the only awards programme that considers a business’ performance from every perspective. Wilsons Auctions, having won the award last year, needed to satisfy the programme eligibility criteria and undergo a requalification review process to ensure that they had continued to uphold the standard of a Deloitte Best Managed Company.

“To be named amongst the top business performers in Ireland is a great honour.” Stated Peter Johnston, group operations director of Wilsons Auctions: “We are a family owned
business, with an enthusiastic management team who are highly involved in the day-to-day running of each destination across our group. Each of our operations work in different markets with different audiences but all operate under the same best practice principle – our customers comes first.”

Commenting on the winners of the Deloitte Best Managed Companies Awards Programme, Pat Cullen, managing partner, Deloitte and judging panel member said: “The Best Managed Companies Awards Programme shows that Irish indigenous companies are a cornerstone of growth in the Irish economy and can and will play an important role in Ireland’s overall recovery. For proof of this, you need look no further than this year’s winners.”