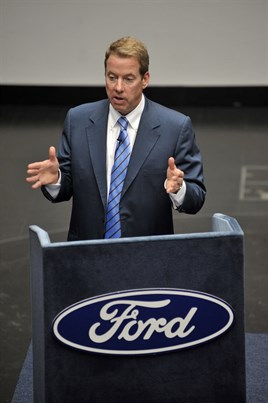 Ford has confirmed it will offer a range of plug-in and hybrid compact vehicles over the next few years, starting with the Transit Connect electric van this summer.

Speaking at Ford of Britain's Centerary dinner at the Science Museum in London on May 26, the company's executive chairman Bill Ford confirmed five ultra-low emission and zero-tailpipe emission models to be introduced by 2013.

Ford told guests: "A preview of the next step in this revolutionary transformation is here in this gallery with us – the Ford Focus Electric. It is one of five full-electric or hybrid vehicles that we plan to introduce in Europe in the next two years.

"The first will be the Transit Connect electric vehicle, which I had the chance to ride in today, and which we will launch later this year. The Focus Electric here is a battery powered vehicle we will launch next year.

"After that come the C MAX Energi Plug-in Hybrid, the C-MAX Hybrid and another next-generation petrol hybrid electric vehicle, with all three being launched by 2013."

"Along with our vehicles, we are reducing the carbon footprint at our facilities around the world. Here too, the UK is leading the way. Dagenham generates much of its electricity using wind power, and work on a third turbine starts this summer. Bridgend was the first automotive manufacturing plant in Europe to use solar power to generate energy, from panels mounted on its roof."