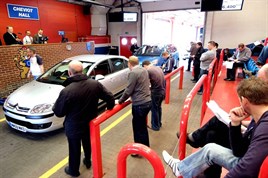 In the biggest sale staged by Citroën and BCA in partnership this year, the manufacturer offered and sold 360 cars and commercial vehicles for a 100% sell out success. The sale generated a turnover of £2.9 million, equivalent to 102% of CAP Clean across the board.

The event attracted over 40 Citroën approved dealers who competed in the auction hall and via Live Online for the sparkling selection of vehicles. A total of 52 vehicles were sold online, equivalent to 14% of the sale entry.