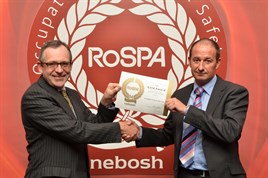 Northgate Vehicle Hire has been presented with its third consecutive Royal Society for the Prevention of Accidents’ (RoSPA) Gold Award.

The Award was presented to the company’s safety and environment manager Colin Gilstin at a ceremony at the Birmingham Hilton Metropole Hotel, National Exhibition Centre. The ceremony took place alongside Safety & Health Expo 2011.

RoSPA launched its awards programme, which looks not only at accident records, but also entrants’ overarching health and safety management systems, including important practices such as strong leadership and workforce involvement, 55 years ago.

Darlington-based Northgate Vehicle Hire, which operates a fleet of more than 60,000 vehicles from 62 locations across the UK and the Republic of Ireland and also operates in Spain, won RoSPA Occupational Health and Safety Gold Awards in 2009 and 2010 after winning a Silver Award in 2008.

David Rawlins, RoSPA’s awards manager, said: “RoSPA firmly believes that organisations that have demonstrated their commitment to continuous improvement in accident and ill health prevention deserve recognition. Northgate Vehicle Hire has shown that it is committed to striving for such continuous improvement and we are delighted to honour it through the presentation of an award.”