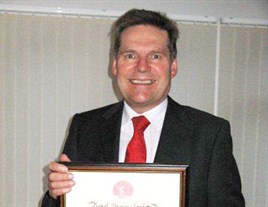 Fleet Manager for Auto Windscreens Andy Gray has been commended for his bravery at an awards ceremony at the Derbyshire Police Headquarters and presented with a Royal Humane Society award by David Coke-Steel, High Sheriff of Derbyshire.

The award was bestowed on Andy for courageously saving a man who was drowning and near to death in the River Rother at Somersall Park, Chesterfield.

Gray said: “A member of the public was pointing to a man laying face down in the river with just his arm sticking above the water. We swam into the river and dragged him up the river bank whilst my wife called the emergency services.

“It was evident that the man was not breathing, his face was blue and covered in mud. We turned him on his back, cleared his airways and administered chest compressions. Eventually there was a gurgle and a splutter and the man started to breathe. We put him in the recovery position and kept him conscious until the emergency services arrived.”

The man was taken to hospital and was released a few days later having made a full recovery.

Gray added: “I suppose you could say it was all about being in the right place at the right time and taking control of a situation that could have quite easily resulted in someone’s death.”

Nigel Davies, managing director of Auto Windscreens, said: “We are all extremely proud of Andy Gray and delighted that his bravery has been recognised publicly.”