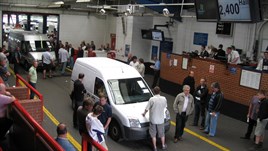 The LCV markets remained steady in June, with some typical seasonal price pressure resulting in an average drop of £78 - equivalent to just under 2% - across the board.

Figures for June show that average values fell to £4,140 from the £4,218 recorded in May and all three sectors – fleet & lease, dealer part-exchange and nearly-new – saw values fall during the month. However, demand was strong with sold volumes actually increasing by nearly 9% compared to May.

At the half-year point, average monthly values have been relatively stable at around £4,200, with only the difficult trading month of April seeing values dip below £4,000.

Values fell by 1.8% in June, although CAP performance actually improved by two points to 98%. Year-on-year values are behind by £140 compared to June last year – when the market was peaking in terms of value.

Duncan Ward BCA’s general manager – commercial vehicles commented, “June experienced good steady demand throughout the month, with buyers very active – particularly in the online arena. The market is exhibiting some very typical patterns for the onset of the summer period and – if anything – June 2011 has been more robust than the same month in the previous two years. ”