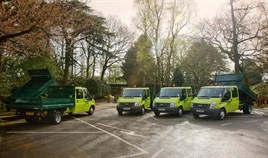 One of Ford's customers has placed a special centenary order, of a vehicle for every year that the manufacturer has traded in Britain.

Glendale, grounds and countryside management services provider, had originally planned a 97-vehicle order for its countrywide fleet, but the opportunity to mark Ford of Britain’s centenary celebrations – and those of Ford dealer Gordons of Bolton – proved too appealing.

Gordons of Bolton is also celebrating its centenary this year having entered into its first agreement with Ford in 1911 to become one of Ford's first dealers.

The 100 Ford vehicles are drawn from the full Ford commercial range, including Ford Fiesta Van, Ford Ranger, Ford Transit Connect and Ford Transit. Many are converted for horticultural and arboricultural work.

Stuart Darbyshire, commercial director at Glendale, said: “The team at Gordons Ford knows exactly what we require from our fleet, what specifications we need and provide an excellent service to us through the life of a vehicle. The relationship between Glendale, Ford and Gordons spans many years and is testament to the quality of the product and the service they provide."

Glendale’s vehicle fleet currently stands at around 650, of which 90% are Ford models.