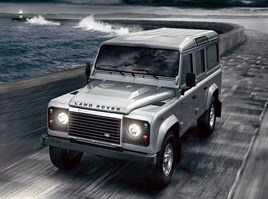 Land Rover is upgrading the Defender for the 2012 model year with a new 2.2-litre diesel engine, making it the cleanest and most refined Defender ever produced.

From November the 2.2-litre EU5 compliant diesel will replace the 2.4-litre seen in the Defender since 2007.

For the UK and other EU5 markets the new engine comes with a diesel particulate filter which, combined with an improved combustion system and sophisticated engine management system, will ensure the lowest possible levels of regulated emissions, although CO2 emissions are unchanged.

The previous engine was first used in the Ford Transit, and while the new 2.2-litre is also being rolled out in the Transit range, it was also used in the previous Ford Mondeo and Jaguar X-Type, suggesting improved refinement.

John Edwards, Land Rover global brand director, said: "The substantial improvements to the Defender in 2007 transformed its on-road refinement and comfort while extending its legendary capability off-road for which Defender is synonymous. With the introduction of the new 2.2-litre diesel engine engine and two option packs, the Defender for 2012 now offers greater customer choice than ever before."

The two new option packs are the Comfort Pack, which will add air conditioning, a CD player with auxiliary input, electric windows and remote central locking for £1650, and an Off-Road Pack, for £1500, which adds ABS, heavy duty rims and MTR tyres, a tow ball and under-ride protection bar.

Prices start at £17,155 for a 2012 Defender 90 Pick Up. Three different wheelbases and 14 separate body styles, from soft-tops to station wagons are produced on the production line.