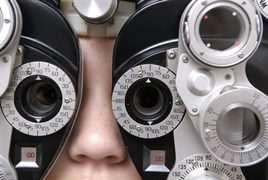 A major insurer is calling for eye tests to be linked to driving licence renewal and made mandatory every 10 years.

RSA’s ‘Fit to Drive’ campaign, which examines the link between eyesight and road safety, also wants all learner drivers to have a full eye examination prior to applying for a provisional driving licence, while the number plate test should be scrapped.

It commissioned Brunel University to carry out research to prove the effects of vision on driving safety and performance.

A panel of people with 20:20 vision were put through a thorough test in Brunel’s driving simulator. Each person was presented with a range of tasks and hazards over a seven mile route and various aspects of their driving performance recorded.

The study found that visual acuity - the sharpness of vision - had a fundamental impact on a driver’s performance.

“They also experience a greater mental workload, which may be manageable over a short period of time, but on longer journeys could heighten the chance of fatigue and therefore increase accident risk.”

Six out of 10 MPs recently polled said an eye test should be mandatory when renewing a driving licence.

In addition, just over half (51%) would support legislation to increase provision for eyesight checking when people take a driving test.