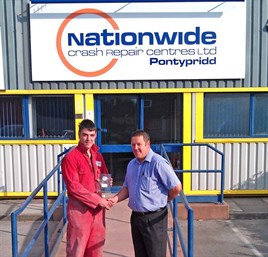 Christopher Offer, a 22 year old apprentice from the Nationwide Repair Centre in Pontypridd, has come second in the UK finals of the internationally respected World Skills Autobody Repair competition out of 1160 students who entered from across the country.

Offer is in the third and final year of his apprenticeship as a panel beater and contested the Welsh heat of the competition at Coleg Glan Hafren, Cardiff’s Tertiary College, where he has been completing his training. In this regional round he scored maximum points in all sections to qualify for the National finals in Glasgow.

The Autobody Repair competition, organised in partnership with SkillAuto a subsidiary of the Institute of the Motor Industry (IMI), provides an opportunity for body repair technicians to demonstrate their theoretical knowledge and practical skills of body repair operations, as well as their problem solving and time management skills. The competition is open to those currently studying or having recently completed training at S/NVQ level 3 in vehicle body and paint operations. Competitors must have less than three years experience within their profession.

The fiercely contested finals were held at the GTG training centre in Glasgow and there were six areas to put Offer and the other contestants through their paces; these included: metal finish, plastic repair, mechanical, electrical and trim (MET) strip and rebuild, setting up a car on a measuring system and completing the measuring process, welding skills on test plates, and the fabrication of a chassis section.

Offer came second overall winning the silver award, only narrowly missing out on the top prize. “Chris is a real credit to himself, his family and the whole team here at Nationwide Pontypridd,” explained Dale Carpenter, general manager of Nationwide Pontypridd. “He is fantastic at his job and never quibbles about any of the work given to him. He is a perfectionist, and we weren’t surprised when he was disappointed to have come second! Out of nearly 1200 apprentices from across the UK, we think that his achievements are tremendous and are very proud of him.”