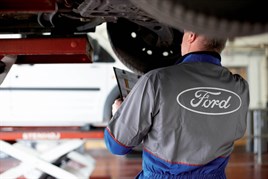 Ford has signed its first fleet – Skillnet – to its no-fee accident management programme after revealing the scale of the problem with the industry’s current business model.

The manufacturer has been lobbying MPs, the insurance industry, claims management companies and legal firms with its ‘blueprint’ for managing accidents.

But within weeks of launching its own scheme it was offered hundreds of pounds by so-called ‘ambulance chasing’ lawyers for drivers’ details.

“At the same time, they are taking personal injury referral fees from solicitors in exchange for ‘non-fault’ drivers’ names.

“We have even been sent a couple of emails from solicitors since we launched offering us £800 for each customer’s details – if we had agreed we could have made £50,000 to £60,000 already by effectively doing nothing.”

While stressing that referral fees play no part in its business models, Fleet Support Group insurance manager David Blacklock told Fleet News that it’s possible to obtain commissions on injury cases of up to £1,000 per case.

“The injured party is entitled to access to justice and if this involves the instruction of a solicitor, that is their right, and should not be diminished,” added Blacklock.

“The problem now is that the normal way to access a solicitor is through claims farmers, legal expenses companies and credit hire/accident management companies and their business model means that they rely very heavily on this referral system. If it is outlawed, will a commission still exist in another guise?”

McDermott says that the industry is also suffering from “inflated hire charges”, with vehicles often off the road for longer than necessary.

It is not the only one: Volkswagen Group and Mazda also launched accident management programmes last year, although neither is specifically for fleets.

Mazda’s ‘Save It’ programme is intended to boost business at its approved repairers by offering discounted repairs on cars that are at risk of being written-off following an accident.

However, accident management companies argue that they can bring savings for fleets by negotiating lower rates with a network of bodyshops. They also point to the need to step in when a third party is involved to minimise claim costs and the role they can play in uninsured loss recovery.

By contracting an accident management company, they argue a company is enabling drivers to get back on the road quickly, reducing the financial impact.

They can also use data to highlight drivers that may need further training, any routes that are potentially hazardous or reoccurring trends in damage or events.

Total Accident Management says fleets need to choose their accident management partner carefully because, as in any industry, the standards of service differ from supplier to supplier.

A spokesman said: “Vehicle off-the-road times and repair costs are the two aspects of customer service which are measured with every client – that is why we adopted our triage approach to an incident.

“After an analysis of the car and the repairs required, it is sent down the route that is the most relevant with an immediate focus to get the vehicle back on the road quickly and repair costs kept under control.”

Ford says its model follows the recommendations of the House of Commons Transport Committee in creating a ‘transparent and efficient programme’, with the aim of driving down the total costs of claims.

Neither Ford nor its partners make any money from personal injury referral fees, while rental vehicles are provided at cost, plus a rental administration charge, rather than charging ‘general terms of agreement’ rental rates.

Karl Helgesen, motor claims director at Zurich Insurance, which does not receive referral fees in relation to its fleet customers, said: “We need a ban on fees across the total market, as well as a significant reduction in legal fees, if we are to see a reduction in claims costs and a reduction in premiums.”

His views were echoed by the Motor Insurers’ Bureau, which said: “Banning referral fees is an important first step in tackling our dysfunctional compensation system, and needs to be accompanied by a reduction in legal costs and action to tackle whiplash if honest customers are to benefit from these reforms.

“A reduction in any unnecessary costs associated with claims should be welcomed, particularly as this also supports the public interest to reduce insurance premiums.”

The Innovation Group is Ford’s partner and makes its return by taking around 10% of the cost of repair – a repairer admin charge – and a rental admin charge in the region of £4.40 per day.

Skillnet is the first fleet to sign up to the Ford scheme. It operates 27 Ford Mondeos on a three-year/ 30,000-mile contract hire deal.

Simon Hall, managing director of UK motor services at TIG, told Fleet News that the new contract was “testament to the ethical way the scheme has been set up and the benefits it delivers”.

Lee Acton, chief executive of Skillnet, added: “The fleet accident management programme offers us a cost-effective, turnkey solution to the thorny problem of how to get our staff back on the road safely after a traffic accident.”

Ford says that only one customer out of 359 who have called to report an accident asked about personal injury claims “proving if you don’t incentivise claims managers to coerce drivers they don’t look to make a claim”, said McDermott.

The manufacturer has also achieved an average rental hire of 7.4 days versus an industry average of 19 days. Ford says at the current industry credit cost for a 1.6 Focus that would equate to £746 for 19 days, while its own hire costs for 7.4 days would be £247 – a saving of £499.

The OFT has launched an investigation which will focus on the provision of third-party vehicle repairs and credit hire replacement vehicles to claimants.

The decision was prompted by the responses to the OFT’s recent call for evidence. This focused on finding out the facts and reasons behind recent reported increases in motor insurance premiums.

Responses received by the OFT indicated that a key factor in these increases has been a rise in the costs associated with personal injury claims.

Karl Helgesen, motor claims director at Zurich Insurance, explained: “Premiums in the personal lines market have risen dramatically in recent years, particularly due to well publicised issues relating to the volumes of personal injury claims, fraudulent and staged accidents, and the nature of the market which led to unsustainable premiums in the mid-1990s.

“In the fleet sector, the issues have been the same, although the pricing fluctuations haven’t been as marked.”

However, the increased cost of third-party non-injury claims, which include credit hire replacement vehicles and third-party vehicle repairs, are also factors which have had a notable impact.

As a result of this work, the OFT says it has reasonable grounds for suspecting that there are features that restrict and distort competition relating to the provision of third-party vehicle repairs and credit hire replacement vehicles to claimants.

The Government announced plans to ban personal injury referral fees in September. Announcing the crackdown, justice minister Jonathan Djanogly said: “Many of the claims are spurious and only happen because the current system allows too many people to profit from minor accidents and incidents.”

Sonya Branch, senior director of services at the OFT, said: “Our concerns relate to the provision of third-party vehicle repairs and credit hire replacement vehicles to claimants, where we suspect companies may be competing to extract money from each other rather than keeping premiums as low as possible and providing car owners with value for money.

“By carrying out a market study, we aim to clarify whether a market investigation reference to the Competition Commission is appropriate.”

The OFT expects to complete its market study by spring 2012.