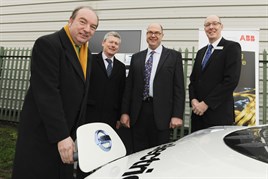 The publicly available station, which can recharge an EV battery in as little as half an hour, has been installed at the headquarters of family-run printing company RCS in Retford, Nottinghamshire, just 5 miles from the A1.

An example of a private-public partnership, it was bought by RCS with financial support from the government-backed Plugged-in Places project, being delivered in the Midlands (as Plugged-in Midlands) by Cenex and Central Technology Belt.

Delivered and installed by ABB, the Terra 51 DC station is part of the Plugged-in Midlands network of charging points that are currently being installed across the East and West Midlands.

Baker said: “Our strategy to increase electric vehicle adoption is clear – encouraging motorists to switch through provision of a comprehensive, accessible infrastructure of charging points operated by both the public and private sectors.

“The installation of this advanced, DC charging station at RCS will not only make it easier and faster for Electric Vehicle owners to recharge away from home, but demonstrates how the Plugged-in Places programme is helping to stimulate private investment in vital infrastructure.”

Mike Todd, managing director of RCS, said: “This new rapid charging point is the next step in our own environmental programme, and provides a convenient addition to the charging infrastructure, close to the A1, for motorists and companies that have embraced Electric Vehicles.”

Plugged-in Midlands, a consortium of Midlands-based businesses and local authorities led by Cenex and Central Technology Belt, has been created to provide the infrastructure necessary to support and encourage electric vehicle adoption.

In December 2010 it secured up to £2.9 million of funding from the Government to support a £6.3 million programme which plans to install more than 500 charge posts in high profile locations, including shopping centres and railway stations, across both the East and West Midlands.