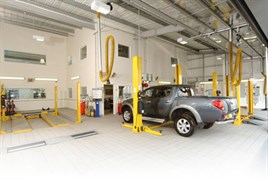 “If the dealer is already familiar with the vehicle through servicing and MOT tests, the disposal of the vehicle then becomes a much quicker, easier process which may in turn produce better value for money.”

Mitsubishi has piloted the programme through its own contract hire scheme which has proved successful in both sales and residuals.

However, CAP chief editor Chris Crow warns that older vehicles may see a reduction in value if the economic climate continues to push companies to extend replacement cycles which will make vehicles less desirable.

“This scheme will improve values for good- quality, low-mileage, nearly-new vehicles and deterioration in values on older, higher-mileage, poor-quality vehicles. On that basis, let’s hope for Mitsubishi’s sake fleets don’t choose to extend their replacement cycles in the difficult economic climate that we will inevitably face in 2012.”

Customer confidence and reliability will play an even more important role as take- up of electric vehicles continues to grow.

Mitsubishi’s change of philosophy almost a year ago to focus less on high-performance cars and invest more in low and zero-emissions vehicles was a surprise to many but remains firmly in place.

With new, greener products in the pipeline, it expects to increase its share of the car market.

Mitsubishi’s target is for 50% of sales to be electric or hybrid by 2020, but Messenger believes the actual figure by then will be much greater.

“The L200 and Shogun is our heritage but the factories recognise where our future lies,” he said. “I see a much greater acceptance through fleet for electric vehicles.”