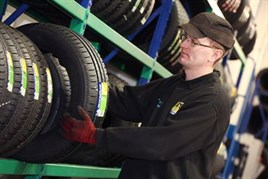 ATS Euromaster in Portslade, Brighton, has been named ‘Tyre Centre of the Year’ at the Tyre and Fast-Fit (TAFF) Awards 2012.

The annual award was made by the National Tyre Distributors Association (NTDA), which recognises the fast-fit centre which provides the highest levels of service for customers.

More than 30 centres around the UK were nominated and mystery shopped by telephone on two separate occasions, and rated according to a comprehensive 30-point check list.

A final round saw staff at the centre in Church Road excel, scoring 95% when a mystery shopper visited with a specially-prepared vehicle. This score was 22% higher than the second placed finalist.

Jason Cunningham of automotive research specialist Encircle Marketing, which conducted the mystery shopping, said: “ATS Euromaster Brighton West was the only centre to conduct a full safety inspection of our vehicle, inclusive of oil, brake and water levels, plus wipers cleaned.

“The appearance of the site was of the highest standard with all staff wearing clean overalls.”

ATS Euromaster’s facility in Brighton West was officially opened in February 2012, after relocating from a former site half a mile away.

The centre underwent an extensive £320,000 renovation programme prior to opening, transforming the former car showroom into a state-of-the-art branch offering local motorists a full range of tyre and fast-fit services, as well as MOTs, air-conditioning servicing, diagnostics and scheduled maintenance servicing.

Colin Butterfill, Centre Manager at ATS Euromaster Brighton West, said: “Being voted the best tyre centre in the business is the icing on the cake in what has been a fantastic year for the whole team.

“We appreciate customers have a choice when they select a service provider, and this award reinforces our commitment to offering local motorists an honest and professional service, backed up by the utmost attention to detail and competitive pricing.”

The new centre was opened as part of ATS Euromaster’s extensive retail development programme, which has seen more than £14 million invested during the last two years, upgrading facilities and introducing new services throughout the company’s network of more than 350 centres nationwide.